Taking Stock of the toons

I figured it was time to make a "where am I going and why am I in this handbasket" post, also known as wth am I doing in game and what's up with the alts? Since it's a new year, it makes sense to take stock.

Garetia is doing transmutes. That's it. No merrymaker, no dailies, no farming, no raiding, just transmutes. There are grinds I'd like to do on her, but I have only so much tolerance for grinding stuff, and the stuff I need to grind on other toons is more important.

Lyllea is doing way too many heroics, trying to get all of her gear up to purples, and doing titansteel and icy prisms. She's also raid healing.

Level 60-62 Toons:
Monera (the druid) is doing minor inscription research, the occasional lap of Hellfire for herbs, and generally slowly leveling herbalism and inscription. She can now mill Northrend herbs. She gets all the herbs I pick up on any toon to mill.

Adowa (the pally) has been dual-speced ret/holy. I am currently trying to get blacksmithing and engineering up to Outlands levels. Once I do that, I'm stealing the plate heirlooms from whichever toon happens to have them and taking her to at 68.

Llonya (the DK) has been respeced to a tankish spec, and I figure I'll try my hand at tanking with her. She's also the one farming up all the ore to level Adowa's professions. Occasionally I invest a bit of gold to further level her enchanting.

Eiunn (the shammy) is sitting at 21, and I have no idea what to do with her. She's more or less on hold till I figure that out.

Angetia (the mage) is hanging out at 25. I'm pondering swiping the cloth heirlooms off Monera to get her to 30.

Tyrosia (the horde warlock) is still in a "I don't like this server" holding pattern.

Cywair (the warrior) has been run to Loch Modan, and is set to level. I'm hoping that I can get him to 20 at least. Plus, leveling him's a nice change from the squishies. He's got two gathering professions, herbalism and skinning, and I see no reason to change that, especially since the herbalism self-heal is really useful for him. Yay panic button!

And here we have Cywair all decked out in heirlooms on the loading screen. Now, why are his shoulders bigger than his head? Blizz, wtb a turn off shoulders option please! 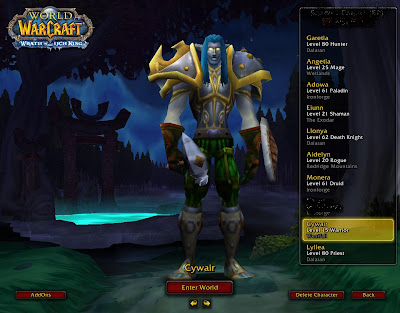