And now we return you to WoW

Which I have been playing, I swear. My guild's jumped back into raiding DS with plans to attempt some heroic modes, with a second raid night dedicated to LFR and alts. I should um, actually get a Horde alt to max level then, because all Lyl needs from LFR at this point is a ring (which I'll likely just buy with Valor) and DPS trinkets+ some shadow gear.

I did learn that either LFR has gotten worse, my computer's gotten grumpier, or that I need to weed out addons, because the entire thing was like a slideshow, even with my video options set to low. I'd go from 80 fps to 1-2 during fights, which means that I just spam Prayer of Healing instead of actually healing intelligently.

I also got a new trinket off Deathwing, Heart of Unliving. +286 int, plus what ends up being 780 Spirit with the "Your healing spells grant 78 Spirit for the next 10 sec, stacking up to 10 times." So far uptime has been pretty close to 100%, which makes up for losing the extra intellect on my RF Windward Heart (+406 int plus random heal chance which I never see).

Oooh, and I have fail stories! My fail, mostly. First, I organized and cleaned out my bags a week or so ago. This went well, except for selling my shadow robe. Luckily LFR was kind and I got a robe token.
Second, I completely and totally forgot that I'd won a helm the week before. Seriously, I'd even gemmed and enchanted it, then forgot about it. I've been rocking the wrong helm for at least a week ;).

Third, an LFR fail. We had two tanks, one of which was my raid leader. The other got pissy that my RL was calling things out (which oozes to kill, that sort of thing) and pulled Warmaster Blackhorn and dropped.  So, Anith of Smolderthorn, you've been reported for griefing. You don't like my RL, fine. I don't care if he was being a micro-managing asshat twit (which he wasn't at all, and I wouldn't raid with someone who was), you don't screw over an entire raid because you don't like one person. 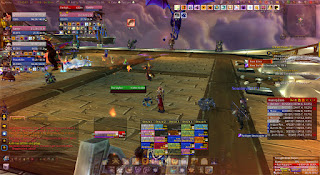 That's been my week in WoW. I would say I'll be playing more, but between Diablo 3, LotRO, and my new "get out in social situations at least once a week" thing, I don't know how much time I'll have.
Posted by Melfina at 10:53 PM