Now that I've had a while to play as MM, I figured I'd talk about what I think of both MM and BM.

First, both specs are fun. Just in different ways.

To play a BM properly (especially in raids) I would need to pay attention to what my pet was doing. I would need to manage both the pet and myself. I don't want to do that, quite frankly. I'd rather leave the pet on AI, trust that it won't do anything horribly stupid too often, and have fun with shot rotations. I also don't care that much about exotic pets. And it makes me happy to do massive amounts of damage on my own, without help.

Now MM has its own set of issues. Mana. I run out fast, and there really doesn't seem to be any alternative to Vipering every other fight. I must have a tenacity pet. You guys remember my ranting about the gorilla? Well, I had to get one, and man I did not like it. It holds aggro like a champ, is a great tank, but I don't like the look and it breaks my crowd control. I got really sick of yelling "I JUST FREEZE TRAPPED THAT MOB YOU STUPID MONKEY!" at it. And we're not going to talk about the butt-scratching and chest-beating while I was trying to fish.

Plus, I have this macro (cast hunter's mark, command pet to attack) and I added the line "Go for the eyes Boo!" to it. Unless you're played Baldur's Gate 2, that will make no sense to you, but it makes me giggle. But it does tend to confuse people when your pet is named Galifor. So, I got me a boo. And he is an awesome Boo and teleports to the enemy and generally only manages to lose aggro when the enemy is almost dead. 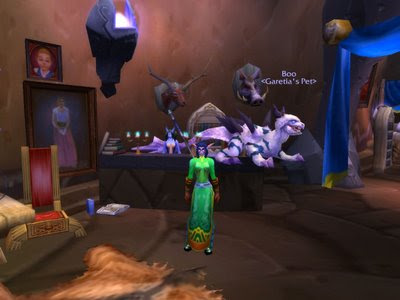 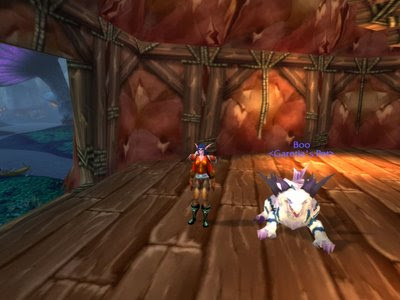 And that's Boo. I heart my warp stalker. And and he doesn't break crowd control. Finally a tencity pet that makes me as happy as my dragonhawk. So there isn't a vanity pet that matches... Blizz get on that please? Oh and can I have a baby sporeling as a pet while you're at it. SO CUTE!
Posted by Melfina at 1:34 PM