How to get the most out of leveling alts during Midsummer

Well, the Fire Festival's in full swing in Azeroth, and it's a great time to level alts. So I figured a few suggestions might be useful... 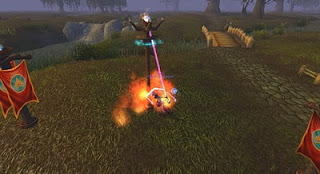 First off, get the buff.  Go spin around the pole till you've got it for 60 minutes.  Here we see Eiunn spinning madly in the Wetlands.

Then figure out where to quest.  The buff goes away when you die, so you're probably going to want a zone that's mostly green to you.  In my case, I grabbed the shaman and headed to Theramore at 42, and hung out there till 45.  Dungeon running's also an excellent option, especially if you can guarantee a decent tank/healer combo.  In my case, the dungeon finder keeps putting me in the hell that is Maraudon, so I stuck to questing.

Now, be slightly picky about your quests. The buff is only for killing stuff, so you're going to want to focus on either killing stuff, or picking stuff off corpses you've killed.  Wow abounds in these sorts of quests, so you shouldn't have much trouble.

Go forth and kill stuff.  Kill everything that's not grey to you.  If you see it, it needs to die. In fact, go cross-country and leave a trail of death behind you.

While you're at it, honor and desecrate fires.  For some reason, it's twice the xp to desecrate, so I'd concentrate on those.

As far as I know, the buff does not increase your xp in bgs, and the generally high death rate in BGs would mean you'd lose it quickly anyway, so I wouldn't bother.  Stick to dungeons and quests, or heck, just go slaughter.  Trying to get to exalted with the Timbermaw and still at a level to get xp from the kills? Go nuts.
And another note, the Ice Stone has melted and if you're lucky, your goodie bag from defeating Ahune will contain his little brother.  Isn't he cute?  Not as cute as the Scorchling, but at least I finally got a pet from that stupid elemental. 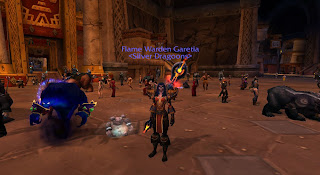