Wait, I have horde toons?

Insomnia struck last night.  Struck with a vengeance.  So what's a girl to do at 1 am?

If you answered go check on the horde toons you've been ignoring since last summer, you'd be right.  Seriously, the last time my warlock leveled was during the fire festival.  I got distracted by RAF and gearing toons and well, most of my gold is Alliance-side, held tightly in the hands of my bank toons (yes I have two now) as well as Lyllea.  She's my gem cutter, so all the profits from flipping uncut gems stays with her.

But I digress. I have two belves (yes, I am a pervy elf fancier and I am good with that), my lock and a pally.  And when I wandered over to see what they were up to and fiddle with them, I realized how much of the old world I'd yet to see.  I've leveled in almost every zone as Alliance, but not really as Horde.  I was missing HUGE chunks of lore and story and omg, fresh zones!  Zones I don't know all the stories in, zones where I haven't done all the quests! Even the zones I know like the back of my hand are shiny and different Horde side.

Of course, I don't have tons of gold on Trollbane, but I also don't have high-level toons.  40 gold seems like plenty for one level 32 warlock and one level 14 pally.  Especially since herbalism was bringing in quite a bit of gold before Trollbane became a recommended server, so I figure I can probably still get some gold out of it.

So here we have a ding shot of the neglected lock, complete with newly-redone UI 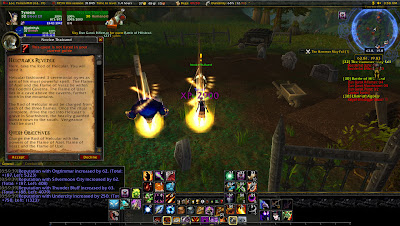 And here's Aethelred the Perpetually Unready, being attacked by an invisible bear.  No, I'm not kidding, he really was attacked by an invisible bear.   Also, having no real ranged attack is painful.  Really painful.  Stupid Dalaran apprentices.  But he has an English accent, so I am happy.  I have no idea why I never realized that, but I am a sucker for a cute blond with an accent, so it is all good. 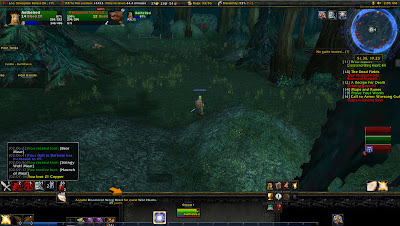