WoW just hasn't been interesting to me lately. I've gotten my DK to 85, discovered that Frost dual-wielding is ridiculous fun, and been happy that both my first guild and my Horde guild are full of awesome people.

There's just been more to rant about than celebrate. Like the tier 4-piece for healing priests. "Dude, we heard you like fire, so here's some healing fire so you can heal while trying to stay out of fire!" I mean, really? Oh, and Ragnaros. Really starting to loathe that fight.

Ooh, and the new expansion. Pandas, well, okay, I'm willing to go with that. Pet battles, okay, could be fun. But, completely changing the basis of classes, AGAIN? GRRRRR!
I feel like there's no overarching plan for WoW anymore, and that we're being used as an experimental ground for Titan.

So, yeah, rather than rant about WoW, I've just not blogged. Sorry.

Instead, I've been trying new things, knitting, and now I've picked up a "sorta" new to me MMO. City of Heroes was my first MMO, I played right at launch, my computer didn't quite support it, and I quit after my free month. But with it going F2P and with a month's sub costing 0.99 (black friday sale), I said "Why not?"

The character creator alone is worth trying this game for. So many ways to customize your character! Here's 3 I've made.

First, we have Greensleeves Djinn, an amoral, profit-hungry villain who uses a bow, heals herself with green fire, and summons ninjas to do her bidding. Yup, ninjas. Originally I wanted to make a pirate queen (with pirate henchmen) and a battle cry of "Men, they stole our rum! GET THEM!" but no pirate henchmen are available. 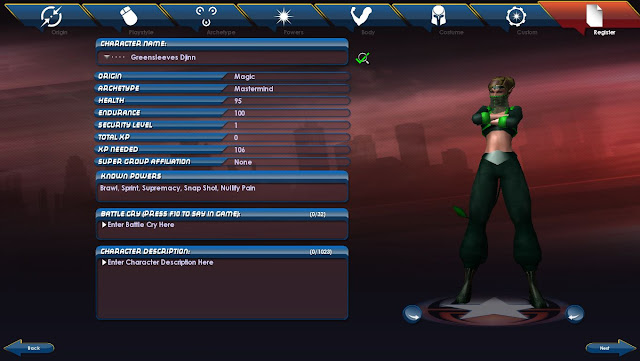 Then we have Ilviena, a mutated (and slightly bitter) young hero who's making the world a better place by throwing enemies around and summoning random stuff to hit them with. 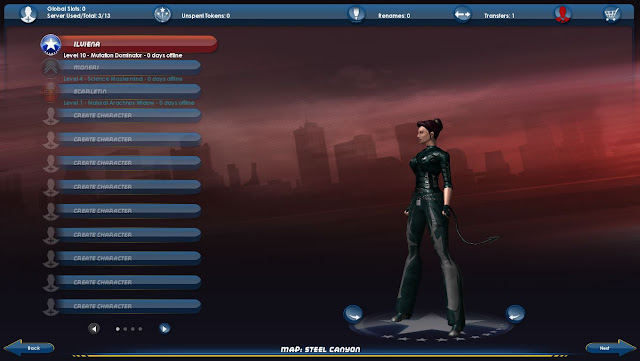 Here's a pic of her in action. She's currently my highest toon (at lvl 10), and a blast to play. 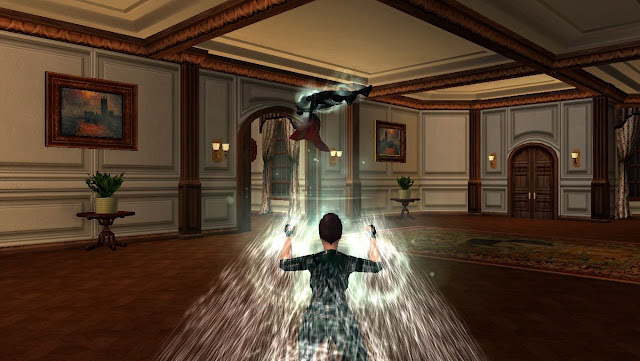 And then we have the first toon I made, a ice blaster. I've been having way more fun with Ilviena, so she's neglected, but I love her look. 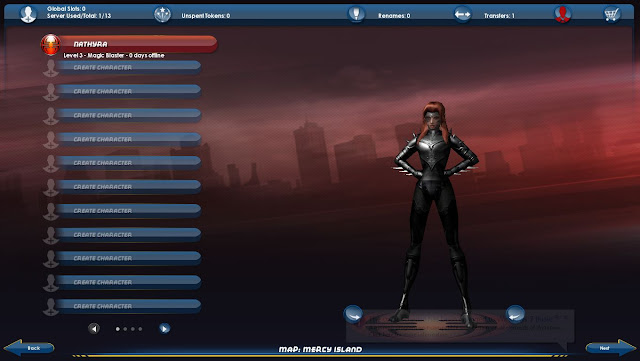 I've also made Kudzu the Devourer, Antonia Drake, Moneri, and a lot of others. The character creator is SO MUCH FUN! I can change not only a character's costume, body shape, and colors, but also change how their powers look, and with the way their classes work, the power sets I choose can really alter how the class plays. Yes, I've spent several hours just making characters, and that's my one complaint about the free version. Two slots. TWO! But but but altaholic here! So I ponied up the 99 cents for a month of VIP time, just so I can experiment and fiddle. I figure by the time the month is up I should have a decently good idea of what I like playing.

I don't expect CoX to hold my interest long-term, but for right now, I'm having a blast. If you, like me, are suffering from WoW ennui, give CoX a look. Me, I'm going back to Paragon City, I have heads to bash in. See you on Virtue (the unofficial RP server, and my server of choice)
Posted by Melfina at 6:54 PM 2 comments: