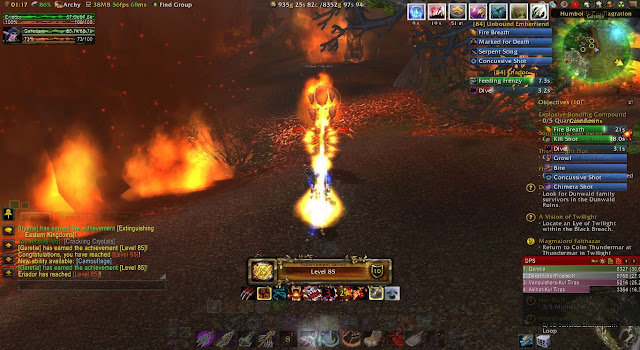 a) If possible, see what your new class is required/expected to do in raids. For example, as a hunter I would be expected to slow adds on some fights, as well as use tranquilizing shot. Also, I'd be expected to mass-rez everyone after we wipe (yay guild perk!).
b) Hit elitist jerks, class forums, wow insider, and class blogs. Read and experiment. Pick up as many tips and tricks as you can. Look at what your class is doing on World of Logs too.
c) Practice! Hit the dungeons. Go PVP. Spend some time at the target dummies. Get used to playing your new class, and your new role. Now, some stuff (like raid healing) isn't something you can practice outside raids, but you can get used to your spells and get comfortable with them.
d) Remember, Rome was not built in a day. It'll take time to get used to your new role, so don't beat yourself up if you're not the BEST EVER in your first raid.
Posted by Melfina at 1:26 PM No comments:

I really like the Fire Festival. Yay extra XP and purple cloaks and easy justice/valor points. So, I thought I'd dust off the druid and pally and go run Ahune with all 3 85s before using the XP buff to get Garetia a bit closer to 85. Here's what went down...

Log onto druid. Wonder what all the buttons do. Remember something about being a crit chicken. Enter queue as dps and go work on troll dungeons questline. Vaguely attempt to figure out Wrath and Eclipse states and WTF do all these buttons do!
Queue pops...
WTF DO ALL THESE BUTTONS DO!
What's my aoe? Do I have an aoe? Isn't there something about gaming eclipse to get max AOE and WTH is my aoe?!?!?
Find Wild Mushroom spell. Attempt to use. Give it up, and hit hurricane till I run oom. Hit tranquility by accident.
Ice core pops up, single target dps! Yay, I kinda know how to do this bit!
Repeat till Ahune dies. Be glad I don't have recount visible. Still don't know what all the buttons do.
Curse strength cloak drop. Wonder what to do with flowers.

Log onto paladin. Enter queue and start unlocking Hyjal. Be glad spellflash works well for ret because otherwise I'd have no idea what buttons to push. Vaguely ponder if there's an aoe seal, and decide not to worry about it.
Queue pops...
Lalalalala I hate melee, stupid adds won't stay still, why won't they stay put GORRAM IT!
Divine storm. Repeat. Hit stuff when possible.
Get most of way through fight before the healer asks for concentration aura. Realize that I have no aura up at all. Yup, failadin for the win!
Ahune dies. Curse caster cloak drop.

Log onto Lyl. Enter queue as heals.  Curse UI that's currently set up for Chogall fight and is distracting.
Queue pops. Buff, and start fight.
Curse melee-heavy group.
Oh crap, my fade's on cooldown and the adds are eating my face! HELP!
Repeat till Ahune dies, with a side order of smiting during core time because well, I can.

Log onto Garetia. Spin around the pole for 30 mins while waiting for dungeon queue to pop.
Queue pops. Vortex Pinnacle, yay easy one.
Why does our healer only have 40k mana?
Why is our healer wearing strength plate? This may not end well.
Wow, I'm the queen of agro! Wait, that's not good.
Oh look, we died.
Again.
And again (but I feigned death and survived, go me!)
Oooh, trapping stuff! Crap, wrong trap. Crap, trapped too early. Repeat.
Darn, my XP buff fell off.
Yay finished (finally). Boo, no level gain.
Oooh, I have dungeon quests to turn in. I should do that. And then there was.... 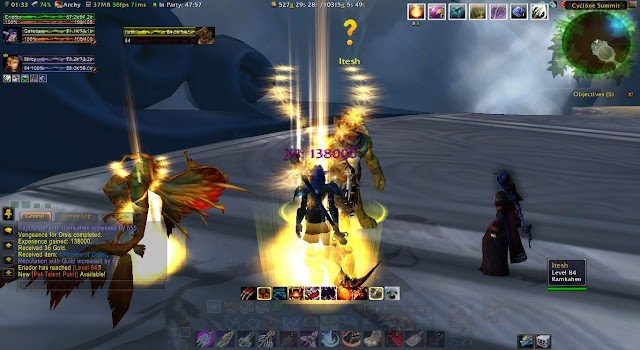 Just one more level to go! Between that and preparing for Firelands (because I really wanted to run Hyjal on 4 different toons, damn you Blizz!) I should be pretty busy. I'm hoping to use the festival XP buff to focus on getting Garetia to 85, then work on Eiunn (the shaman) and Llonya (the DK).
Posted by Melfina at 1:20 AM No comments:

Well, after a night spent wiping on Chogall, I have the following questions/ideas/stuff to get out of my brain. I'm tank-healing (a new role) in a fight that's new to me (and to many of our raid), so I'm trying to get everything down while it's fresh. Feel free to chime in with tips, tricks, or anything else.

1) About what throughput should a tank healer have on this fight? I was managing about 9.6k hps, with my top 3 heals being PW:S, Greater Heal, and Penance, but man, the tanks health yo-yos like crazy.

2) Mana? I've just redone my spec to pick up the shorter shadowfiend cooldown, and hopefully that'll help. Part of the problem (I think) is that I'm always healing the tank on Cho'gall, so I don't really get any downtime to pop Hymn of Hope or just passively regen. I need to talk to the other healers, see if there's a spot where either the raid healer or other tank healer could keep an eye out while I pop it. Same goes for pots of concentration.

3) I need to figure out where in my UI the stupid corruption thing is. Never did find the sound meter for Atremedes, and I suspect it's the same problem.

4)Cooldowns. I need to talk to the tanks about calling these out. Also, I need to figure out how to view their debuffs, see what that fire thing vuhdo shows me is, and what debuff's causing the massive health drops. Once I figure that out, I'll have a better sense of when to panic.

5)GTFO is incredibly helpful for this fight. Seriously, with most of the raid stacked up with me, I can't see a darn thing on the floor. My tunnel healing vision does not help.

6) Power Auras for stacks of Grace and also for PoM. Ooh, and a low health one would be nice. And Inner Focus, Power Infusion, and Pain Suppression. Reminding myself I have these means I'll use them more, and I need to.

7) Shadowfiend macro. Why do I not have one? And while I'm at it, Misdirection macro for the hunter.

8)Do we have only one melee? Maybe we should have one of the ranged stand with the rogue, so the tanks don't have to worry as much about that possession thing.
Posted by Melfina at 1:03 AM 2 comments:

More lotro and a bit of WoW

I've been laid up for most of the week with sprained ankles. This has given me a lot of free time to play games, lotro in particular. Oh, and if you're interested in lotro, please read the excellent comment left on my last post explaining the classes far better than I can.

I've been having a blast, especially with my Hobbit Warden. I'd forgotten how relaxing I find farming, and isn't she cute? 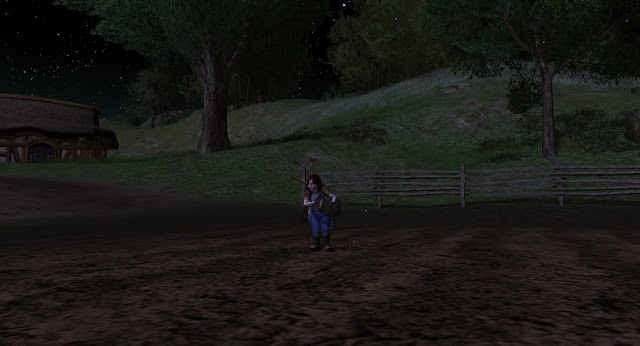 And here we see the Shire at sunset. So pretty! 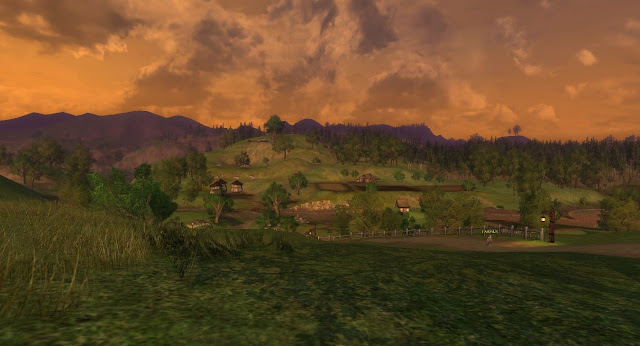 In WoW news, I may be switching healing roles from raid to tank. The holy pally in our raid team wants to try raid heals, so we'll likely be switching roles.  I need to figure out stat weights, and I'll likely spend some of my weekend playing around with Mr Robot, experimenting with different stat weighings. I'll let you guys know what I come up with, but tonight I wander around Bree!
Posted by Melfina at 7:10 PM No comments:

Noobing it up in LotRO: Part 1

This is the first in an occasional series about other MMORPGs. Basically, I'm going to try games, and report back. First off is a game near and dear to my heart, Lord of the Rings Online. This game is free to play, and while there are loads of extras you can buy, you earn currency through in game stuff as well, allowing you to never have to purchase points if you don't want to.

To that end: complete deeds. I know, you're going "wtf are deeds?" Deeds are rather like achievements, but there's a lot more of them and you get titles and turbine points and virtues from them. So, you kill x goblins, you complete a deed. You use special attack A so many times, you get a deed. See, here I just got one for Wolf-Killing. 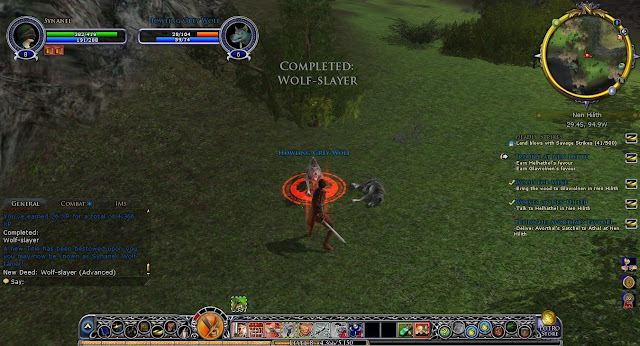 And here's my deed log, showing an example of a virtue. There's deeds for exploration, killing stuff, questing, using special class abilities, running dailies, and probably more I don't know about yet. The toon there just got rolled this morning, and already has quite a few deeds to her name. 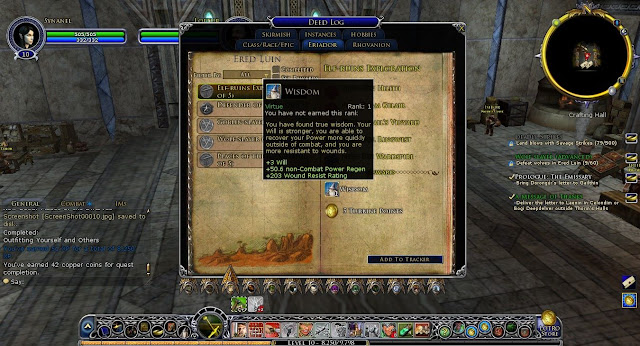 So, when you see a deed pop up, try to get it done.  More points = different classes, more bag space, quest areas, crafting bonuses, and a bunch of other stuff.

Now: classes....
Your creation screen won't look quite like this.  I ponied up for the two pay classes, Warden and Runekeeper cause I wanted to. But the basics are pretty similar to Wow. Different races, not every race can be every class, and oh, no female dwarves.  Dwarves and elves start in the same zone, and hobbits and humans share the other starting zone. 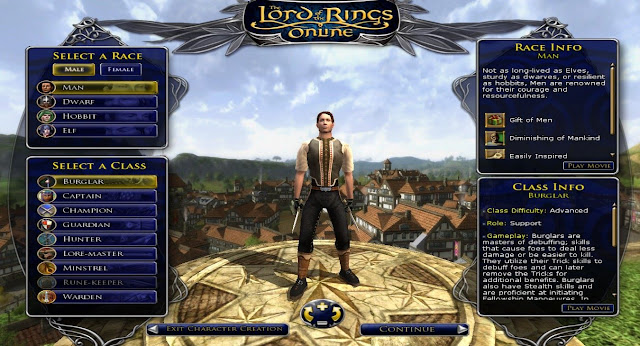 The class info screen is really useful. Class difficulty, role, and gameplay are all things you want to take into account when rolling up. Below is a very vague description of each class.
Burglars->rogue-like
Captain->think pallies with squires. Yup, they're a pet class.
Champion->warriors (but not prot ones)
Guardian->the tank
Hunter->More or less the same as WoW, but no pets. Good in range, not so good in melee, kinda squishy
Lore-Master->the closest you're going to get to a mage, but with pets.
Minstrel->healers and buffbots
Rune-Keepers->Dunno, haven't rolled one yet.
Warden->weird combo of ranged and melee dps with complicated on the side. My warden's lvl 2, so it's entirely possible I have no idea what a warden actually does yet.

There are a few things to keep in mind with lotro. First, it's the journey, not the destination. Yes, there's end-game raiding (or so I'm told, my highest toon is in the low 20s), but there's a huge amount of stuff to do before then. In fact, if you rush straight to endgame, you're kinda missing the point. There's a huge world and tons of content!
Second, crafting's a bit more complicated than in WoW, but also more valuable if you keep it up (the weapons I crafted right off the bat are better than any quest drops I've seen).

So, go try lotro. You lose nothing by trying it (being free and all) and it's a fun game for explorers and quest-lovers. Just be aware, if pvp's your thing, this is probably not your game. PVP is monster PCs vs regular PCs, and is not free (last time I checked).
Posted by Melfina at 6:35 PM 2 comments: