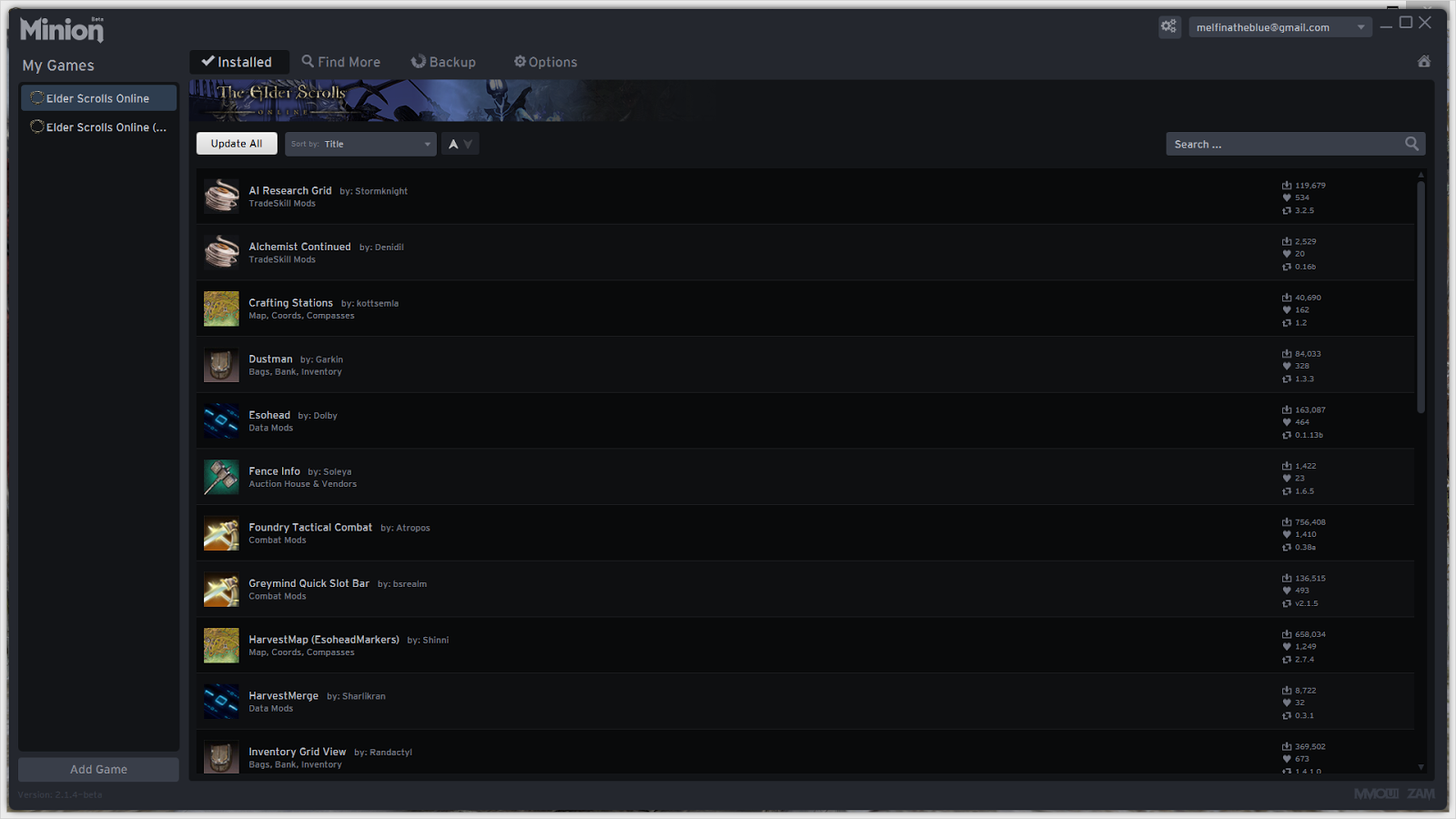 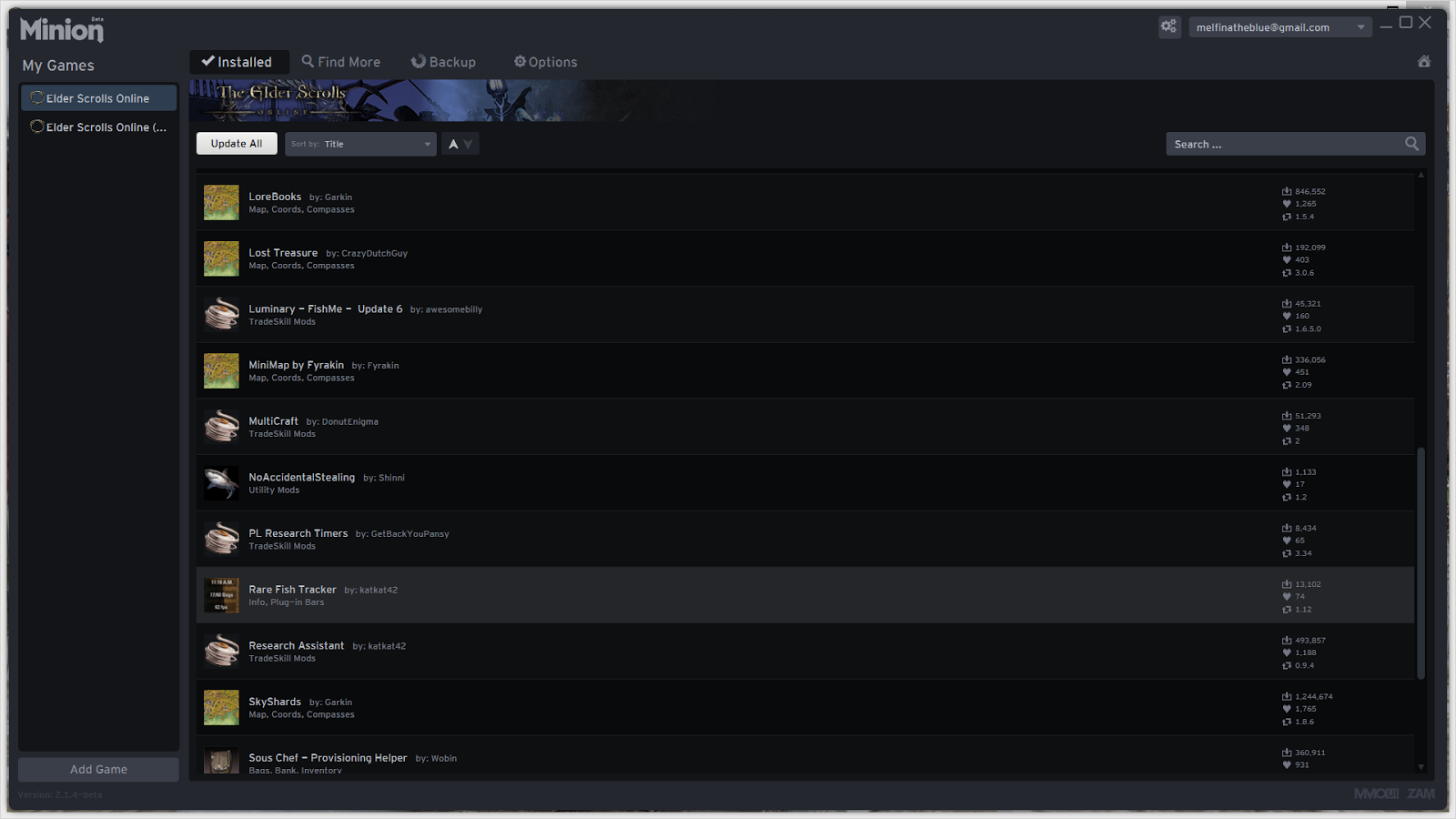 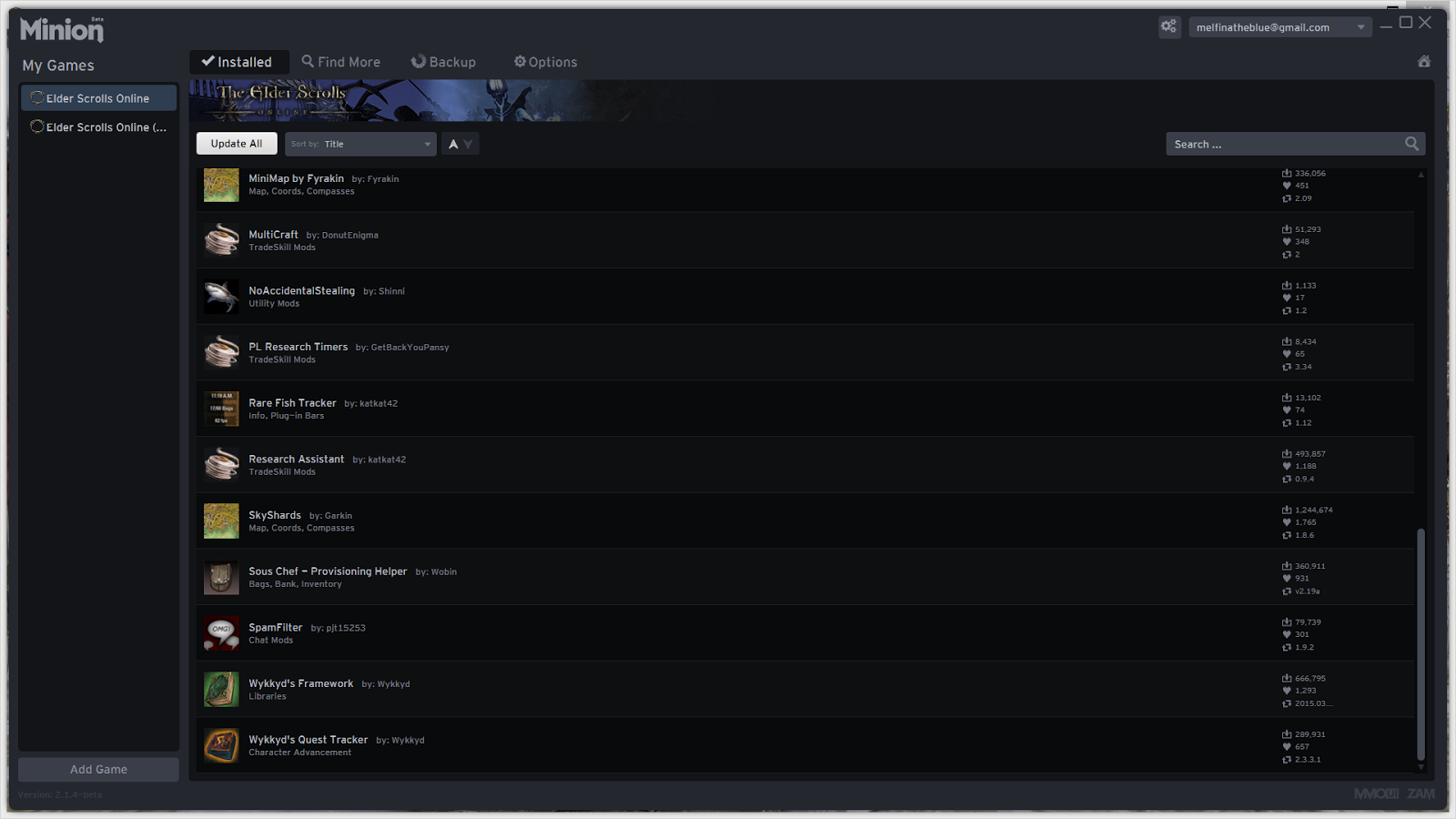 So go forth and play! After all, if you don't like the addon, you can always uninstall it, no harm no foul.
Posted by Melfina at 12:22 PM 2 comments:

So, with ESO now buy-to-play, I jumped in again to try it. I had played for a while over the summer, but it didn't really grab me. There were some awesome bits (exploration, gather ALL THE THINGS), some eh bits (so many choices with skill points, so many crafting things) and some bad bits (combat at which I suck, bag issues, lack of an AH, horrible endgame (so I heard, my highest character was 10)).

But with not having to pay, I figured it was worth another try, if for no other reason that the awesome bits were really fun. And so far, so good.

I rolled a new toon to go through the tutorial again, and they've improved it vastly. The plot makes more sense and is tighter, and the combat feels much better (I will have to jump on my sorcerer once I figure out a build for her and try her, since she's the one I had the most issues with). The exploration is still great, and best of all, I can steal stuff! I had way too much fun sneaking around stealing from containers and then selling it all to the fence for a decent profit (200 gold!). You can also pickpocket and kill people, but I haven't tried those yet (I generally don't pickpocket in games and I have more sense than to try to kill anyone when I'm level 3).

So I'm having fun and would recommend it. The other people running around can get annoying on occasion, especially if you're all after the same thing, but that happens in any crowded MMO (and since this one is a megaserver one, it always feels a bit crowded to me). You can customize the interface with addons (a necessity I think, since the default interface is a bit sparse and less than useful), and it's a beautiful game with loads to do.

Sadly my old screenshots have vanished (unless they're backed up somewhere, which is possible), but here's a few I took with the new toon. This one's from the tutorial (and the minimap is an addon and I've already forgotten how I lived without it). 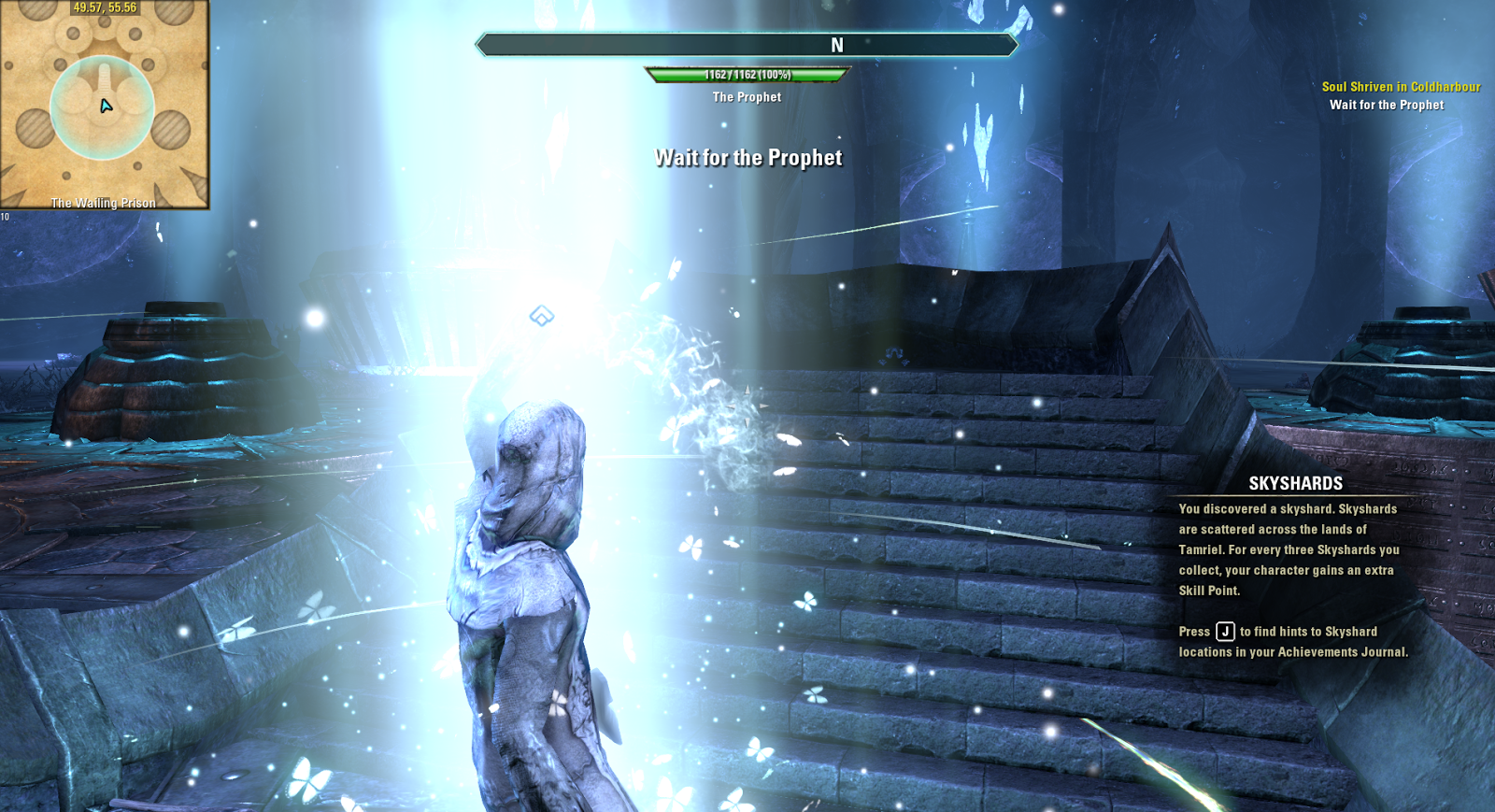 Here we're out and about in a starting zone (and I think I capped this because of the how to steal box, I do that so I can go back and look at stuff if needed). And here we have the new toon crafting. 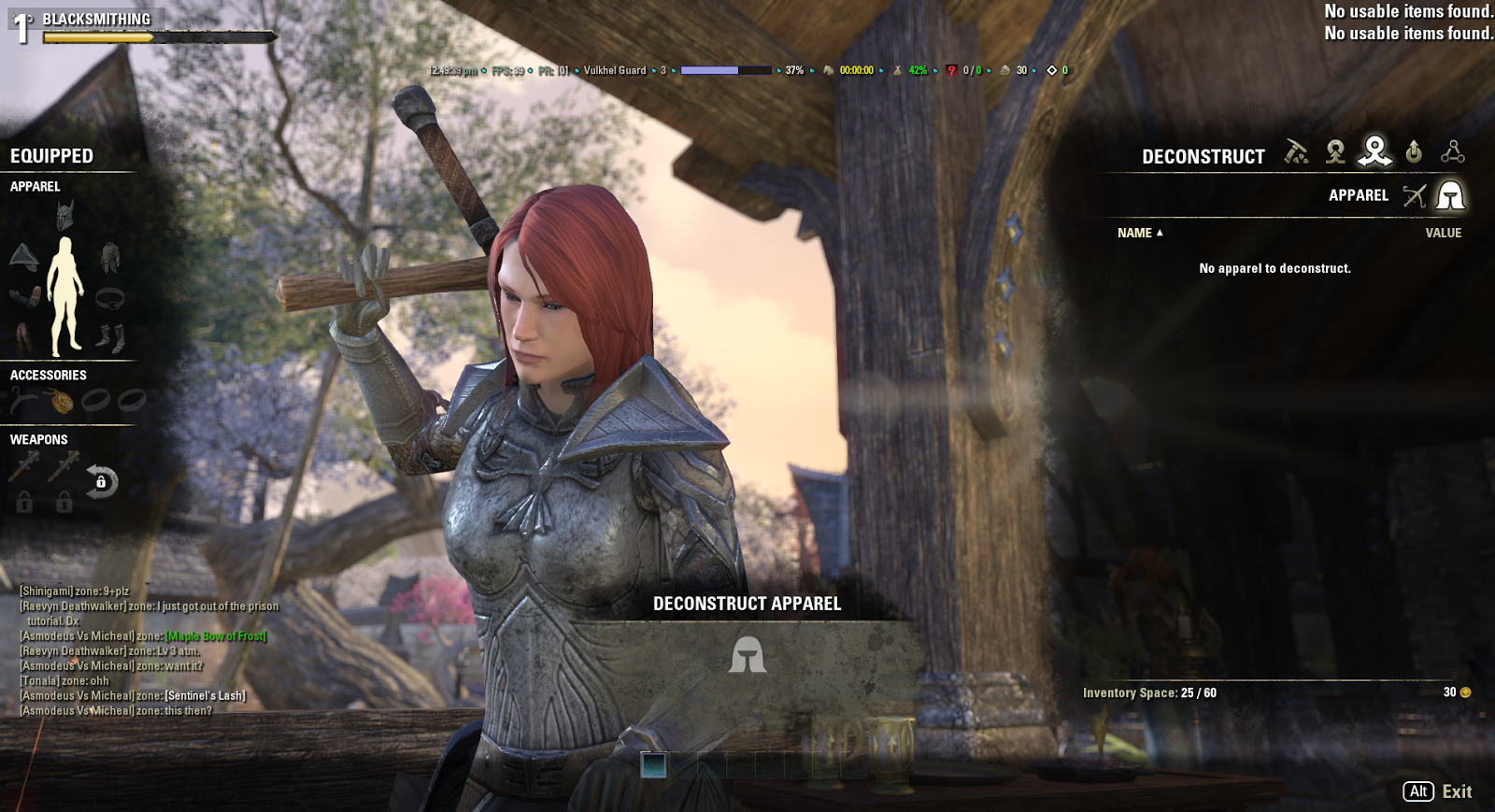 So, my thoughts thus far (summed up)...
character creator still awesome, with loads of choices (almost overwhelming, but still awesome, and realistic body types, yay)
combat feels better (and I know that's incredibly vague, sorry, but I never did nail down why it felt so awkward before other than me being not good at that sort of combar)
bag space still an issue, but that's what alts are for
there seems to be more gold rewards than I remember, which is great as both bag space and mounts are really expensive
the shop is unobtrusive and nothing in it is in any way buy to win (imho, of course).
environment is still gorgeous and exploration is still way too much fun, as is gathering

I won't be subbing at the moment. I'm already subbed to lotro, and the 10% XP bonus you get for subbing in ESO is not really worth it to me. I'm in no hurry to level up, I'd rather run around the world and explore and gather and steal stuff.
Posted by Melfina at 3:50 PM No comments: 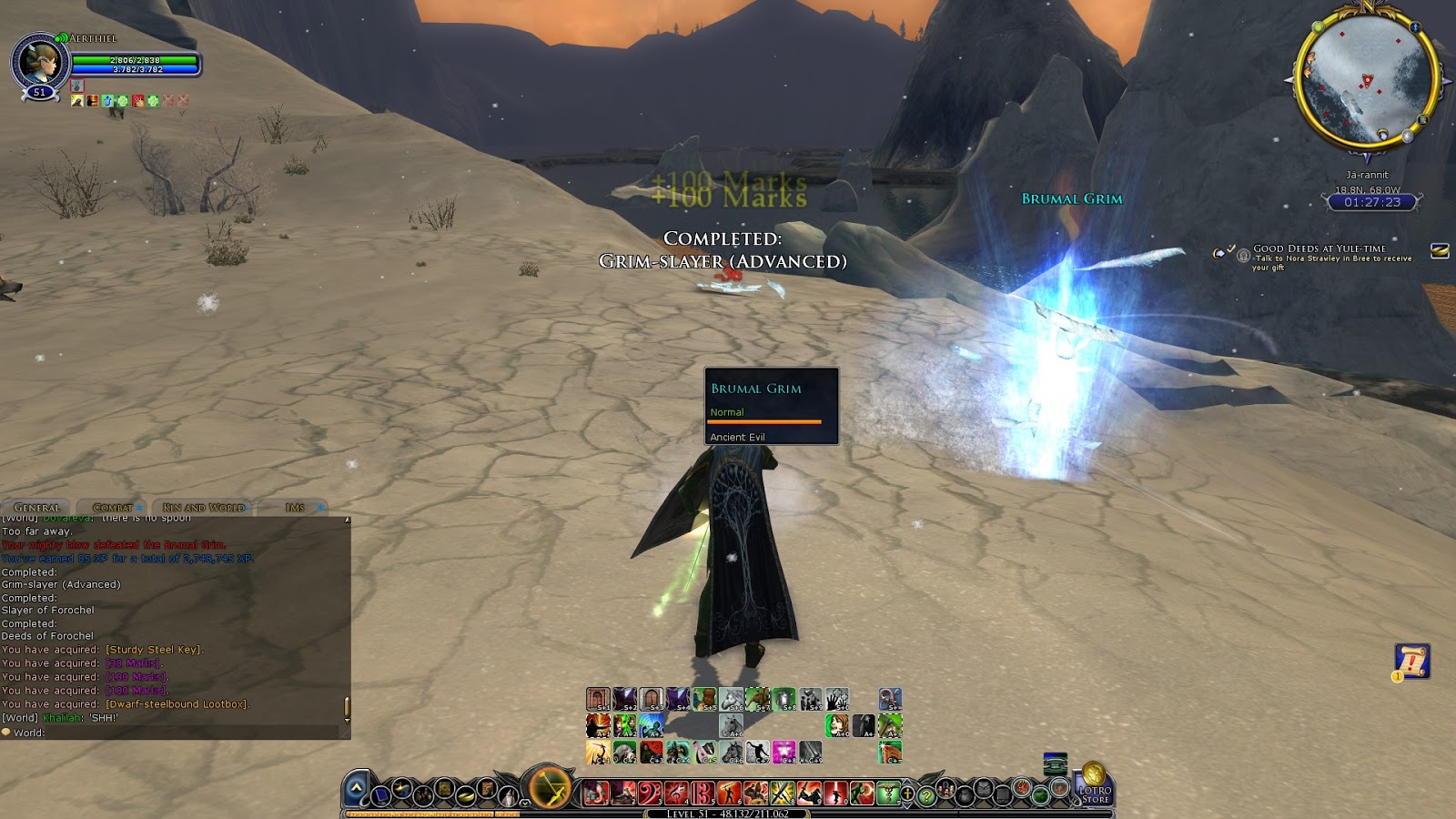 It may be bad form to resurrect a blog for this, but I don't care.

Sir Terry Pratchett, the noted author, died today. I've been reading his books for over half my life, and I wanted to say, well, thanks.

Thank you for teaching me how to laugh even in the depths of depression when I was sure everyone in the world would be better off if I was dead.

Thank you for making me a better writer.

Thank you for helping to shape my sense of humor.

Thank you for showing me the ridiculousness inherent in Life.

Thank you for the Discworld.

I could go on and on about how your writing shaped mine, how your work made my life so much better in many little ways, and how much I owe to you, but I fear if I make this much longer I won't be able to see the screen through my tears, so....

For those wondering where to start with Sir Pratchett, I'd suggest Small Gods if you're okay with a (mostly) gentle mocking of organized religion and philosophy.  There are starter novels to the various "series", which I don't really recommend as a first Pratchett novel simply because they were almost all written early in his career while he was still honing his craft. I'd also suggest The Truth, or Monstrous Regiment. This article from io9 has a nice chart, and if you're curious, I started with Mort when I was 13 or so.
Posted by Melfina at 4:20 PM 1 comment: