I believe the phrase I'm looking for here is... 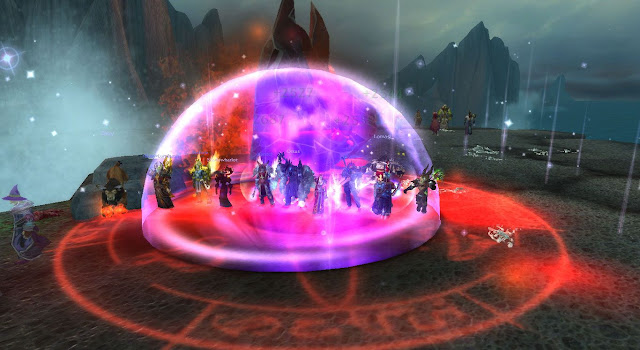 Lyllea, Destroyer's End. Has a nice ring to it. Yay Redeemed for coming back from a series of heartbreaking sub 5% wipes to squash that stupid dragon!
Posted by Melfina at 12:19 AM No comments:

I should write stuff here, shouldn't I?

Sorry about the radio silence. Between a massive serotonin drop (stupid brain) and my new class (whee becoming a certified project manager, boo 10+ hours a week on class and homework), I haven't been very motivated to talk about stuff.  But here, stuff! In more or less brain dump fashion....

1. You can get to the frogs for a chance at Mojo in Zul Aman without being in a group. Here's how I did it on Garetia (my hunter)...
a. Open doors with help of NPC (most annoying part of the process, I swear)
b. Make sure mass of mobs has spawned and is coming towards you. Make a run for the exit. Once outside wait about 30 seconds or so.
c. Carefully sneak back in. The mass of mobs should be gone, and now all you have to do is avoid the wandering elite patrol, kill some of the very squishy trash in your way, and get down to the water. Sneaking and or potions of invisibility are helpful, as is a track humanoids ability (which you can get from a particular food if you're not a hunter)
d. Use up all hex sticks on frogs hoping for Mojo. There's 16 or so frogs, so I'd get as many sticks as you can.
e. Good luck! I'm going to try this on Lyl as well, see how it goes on a character without stealth or humanoid tracking.

2. I've joined twitterland raiding. I have yet to do anything with them, but I like the idea. I do wish there were more Horde raids though.

3. Healers Must Die is really useful for dungeon-running.

4. I'm currently experimenting with seeing how fast I can gear up two toons. One, my much-neglected pally (and I might even make her a holy set), and two, my 84.5 mage. The mage already has a full set of pvp blues, 3000ish justice points (from being leveled mostly through dungeons from 70-now), and a good collection of 308 and 316 gear. I am beginning to think all other dungeons besides Throne of Tides, Stonecore, Blackrock, and Vortex Pinnacle are myths though.

5. I finally have a shaman set I like. I need to go farm the mace that looks like a torch, and I'm still deciding on shields, but I think this is a pretty awesome looking set. I'm not so sure about the shirt, but the armor's a bit too revealing by itself, and I've yet to find another shirt I like.

Speaking of transmog, Redeemed wandered into Ulduar 10 to work on getting people drakes, and Lyl picked up some good gear (including a really cool-looking offhand). I'm hopeful that before Mists, Lyllea ends up with the ICC and Ulduar 25 drakes, as well as the tier 11 and Firelands ones. Eiunn might end up with some as well, since she's my alliance main (and thus the one who's likely to go on the twitterland raids).

6. Redeemed is beating our heads against Madness of Deathwing. We're only really raiding for 2.5 hours a week, so progress is a bit slow. We did get him down to 5 million health last week, but with 3 healers all oom, everyone went squish quickly.

7. Still having fun with my baby lock. I'm really looking forward to getting her to 85 so I have an alt for alt run stuff, and also because affliction lock is entertaining and reminds me of shadowpriesting. I'm also still having fun with her in PVP. DOT ALL THE HEALERS!

8. I'm in the ongoing process of creating a more or less uniform UI across all my toons. This is taking a while.

9. And I probably should figure out another mage spec besides frost. I'm already getting snarky comments about it, but Angetia's never been anything else, and I don't want to bother learning arcane or fire till there's a call for it (aka putting out decent DPS in the new 5mans and LFR). 7ish K DPS is fine for the leveling dungeons, darn it!!

10. And last but not least, the Mists talent things scare me. The only way I'd want to group heal with Holy Nova is if I could chose where it's centered. Otherwise it's far too dependent on my knowing where everyone in the raid is (and I never do). If it ends up being our only group heal (no prayer of healing), and stays centered on me, I'll be trying Holy again. I love bubbles, but I'm also a raid healer and need to remain viable in that role.

So there you go, stuff I've been up to. Now bed. I'm sleepy, I have to get up early, and I have a ton of homework to get done. Plus knitting, I also have a ton of that to get done, and Anachrocon starts on Friday, so I need to prep for that.  ACK, BUSY!
Posted by Melfina at 10:12 PM 2 comments: