A Pet Comparison, of sorts

Well, I pulled out my cat this morning, to see how he did compared to the cunning pets I've been leveling with. So far he's done decently.

He does more damage than either cunning, but has a bit more trouble holding aggro. Since he can stealth, I figure I'll level with him, and then try him on pvp, trapping and guarding stuff. At 80 I'd like to have at least one of each type of pet and do a true comparison to get a sense of how the three different types mesh with my play style. I'll need to do some research first though. My pets must be special and shiny (which Llofios isn't, but he was my first pet so I'm keeping him).

I'm also pondering a respec, maybe try marksman. I like BM, but I am curious about the other specs.

In other, non-hunter news, my baby pally hit 20, joined a guild, and got run through DM and Stockades. I learned an important lesson in the Stockades... buffing generates aggro. I knew healing did, but didn't know about buffing. Makes sense. It was an interesting run. My alt guild leader, a 71 hunter, used eyes of the beast to pull everything with his pet, then volleyed them to death. I'll have to try that on Garetia when I run it on her (I want the Siamese and the achievement).

Later today, there's going to be a ZF run, which will hopefully be more successful than my last one. Good time for Llof to gain a few levels, and maybe for me to pick up some new gear (I tend to get new gear from quest rewards and drops, and lately luck has not been with me).

Oh, and I hit Master Herbalist. My alchemy is at 277, but it's on a bit of a hold so I can auction the herbs I find. Need money for the mount after all. I also need to up my faction rep with the gnomes by a ton. I'm at revered, but just barely. (Garetia believes that Darnassus is tainted beyond repair, and thus her having a mount from there makes no sense. I figure the gnomes or the dwarves make slightly more sense, given her proclivity for guns)
Posted by Melfina at 11:58 AM No comments:

I Haz a Whelpling! 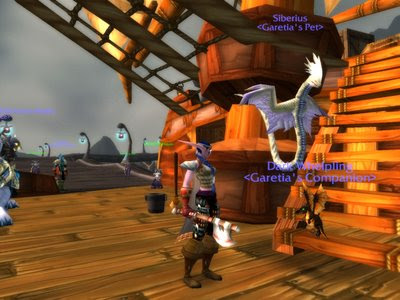 And that would be it. After 110 kills, two green drops, and one blue. The white serpent is my new pet. He's a rare spawn in Feralis. I've figured out why I feel this need to have rare pets.

Night Elf hunters are a dime a dozen, and having an unusual pet, whether it's Siberius above or Eriador below differentiates me a bit. (I threw in a screenshot of my much-neglected kitty, Llofios, so you could see all my pets). And the screenshot is from just after I got him, before I named him, apparently. 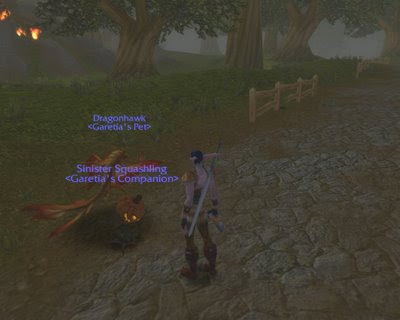 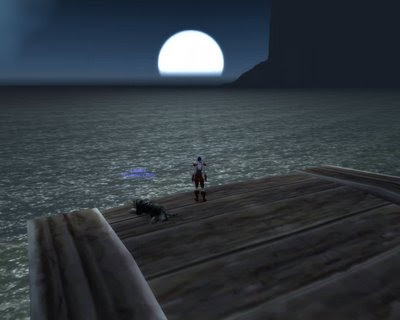 Posted by Melfina at 4:25 PM No comments:

The Amusement of Farming

I want a crimson whelping. I randomly farm for them now and again, and today I had something interesting happen...

I try to farm early server time, about 9 am or so. This generally means that no one's around. Today I started, discovered that track dragonkin is awesome, and then two lvl 80s showed up, a druid and a warrior. We were all competing for the same drops, and they could kill faster and had epic mounts. So how did I outfarm them?
1. Track Dragonkin. I saw the respawns first.
2. Ranged attacks. The warrior had to get right up to the spawn. I just needed to get 35 yrds away, fire once, then run onto the next one. THen either my pet would kill it, or it'd run after me. I'd get four or five at a time, with Aspect of the CHeetah up. (note: this does not work so well with the ones with ranged attacks bc of stunning)
3. I knew what I was going for. I know what whelpings in the area have the 1/1000 drop chance and what ones don't, as well as their general areas. The other two were spending extra energy killing what I left behind, the lost whelps.

At one point the dwarf even tried to shoo me off. Pissed me off for a moment, and then I realized that he wanted me to leave because I was getting more than he was. Ha! Like that's going to happen!
Posted by Melfina at 1:31 PM No comments:

An introduction, of sorts

Hi. I'm Melfina, and I love Wow. I'm also a WoW noob. I only started playing at the end of August. I've been boring my non-WoW playing friends to tears with my WoW stories so I figured I should just get a blog.

I started off with a dwarf rogue, based off a D&D character. I made him, and discovered that I had no idea how to kill things. It was really sad. I have no idea what happened, if it just didn't click or what, but yeah, he lasted all of two seconds and I wandered off to go do something else.

The next day I found out what server my friends were on, and started playing there. I again started with a rogue but tried Forsaken this time. Got her to lvl 6, got VERY VERY sick of dying, and decided to try other classes. I wandered over to Alliance on an RP server, and rolled a Night Elf Hunter. In my defense, I had no idea this was the most popular race-class combo. I had played LotRO and liked the hunter class there (and I adore elves in general), so figured it'd be the same. I discovered early on that wow, I was fragile in melee, and got frustrated and rolled a mage.

Stuck with the mage till she was lvl 14 or so, and then switched back to the hunter. Got my first pet (a cat from the Exodar for RP reasons), and the hunter has been my main ever since. I'm now lvl 50.

Breakdown of my Characters/Pets:
Alliance

Female Night Elf Hunter, BM spec, lvl 50
Llofios the cat (who hasn't been out to play since lvl 25)
Eriador the Dragonhawk (who was picked up at lvl 25. There was an insane amount of dying to get him, mostly in transit. I have only ever seen one other Alliance hunter with one)
Siberius the Wind Serpent (Arashi-ethis). Just got him tonight. So far I like him. Pictures from Wowhead

Female Blood Elf Warlock, demonology (but I may respec), lvl 18. This is my horde main.
Female Troll Hunter, undecided spec, lvl 13
An unamed Moth from the Exodar. It took me 8 deaths to get him. I just haven't come up with a name worthy of the feat of getting to the Exodar at lvl 10 as a Horde.

I have a bunch of other toons but they're all under ten, so they don't count yet.

Insane things I've done... so far.
Gotten the Eastern Kingdoms Trick or Treating Achievement. At lvl 23. Believe me, track beasts and track humanoids saved my life more times then I can count, and the only really really bad spot was Eastern Plaguelands.
Gotten two pets from opposing faction starting areas. The moth was really hard, the DH less so (since I had learned the wonders of ghost runs by that point).
Attempted to solo Blackfathom Depths. At lvl 26. I figured that since I could kill all the mobs outside the shimmery portal thing, inside would be a piece of cake. Wow, did I learn that lesson quickly.

Currently I'm trying to power-level to 80, learn how to play my class properly (I just learned what Freezing Trap was for two days ago), and hopefully do some raids that aren't my friend's lvl 70 mage pulling everything and killing it, then I loot. Not that I mind that, but it'd be nice to actually attempt a proper raid.