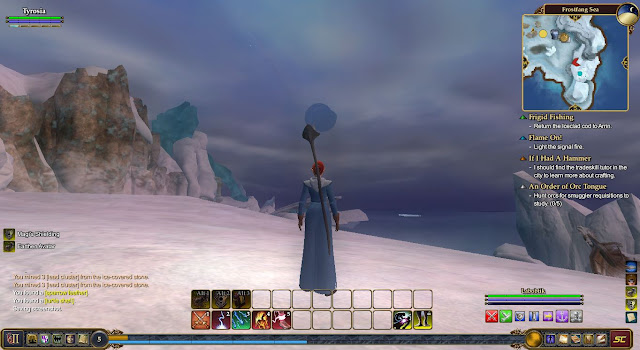 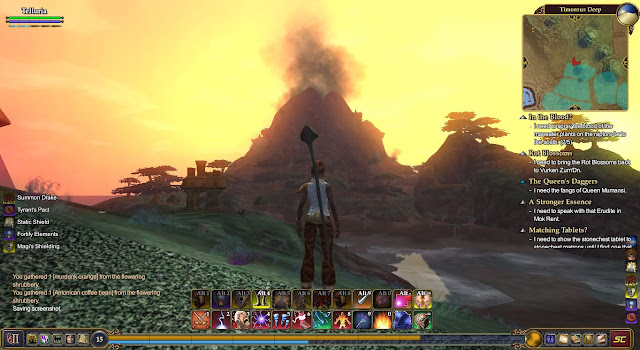 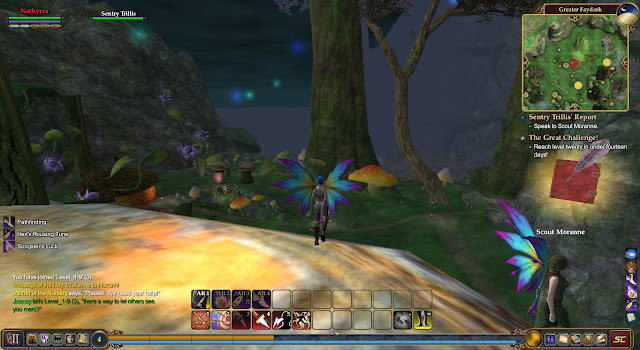 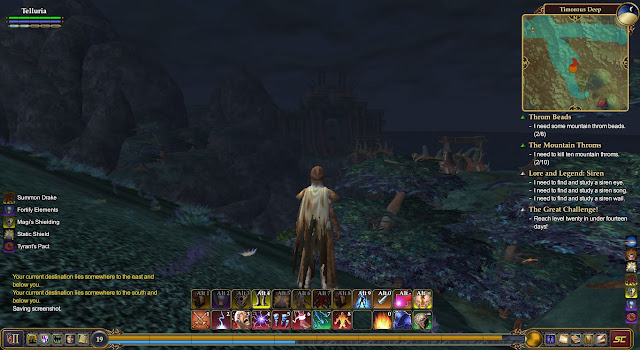 Wizard again, in her starting zone, Timorous Deeps
Posted by Melfina at 1:17 PM No comments:

Figured rather than write a sum-up of 2011, I'd sum up the MMOs I tried and what I think WoW players might like or not like. So, without further ado...

Lord of the Rings Online
LIKE:
Free to play
Gorgeous world
Lots of character customization
Appearance tab (so you can look like you're wearing an awesome outfit no matter what mess you're actually in)
Epic Lore
Housing!
Semi-sane community (less STFU NOOB sort of thing)
You can PVP as a monster

DISLIKE:
Limited Storage Space (need to purchase)
Free to play is more like free to play till level 20 or so
Lack of actual wizards (for lore reasons)
Travel's much more complicated than WoW (though you can buy stuff to make it easier)
PVP is not free to play

COULD GO EITHER WAY
Leveling's much slower than WoW, but endgame doesn't feel as important
Loads of achievements (and you get abilities from said achievements rather than from talent trees)

WHY TO TRY IT
If you're looking for another fantasy MMO, like Middle Earth, or are just looking for a slightly slower pace, this is a great game. I still stick my head in now and again.

Champions Online
I played this for about 3 hours before uninstalling it, so I don't have much to say

WHY TO TRY IT
I'd say it's worth a try if you like the superhero genre and want more active combat. I'm not a huge superhero person, and I hated the combat (but that's a personal taste thing).

Kingdom of Loathing
You can argue that this isn't a true MMO. I'm reviewing it anyway.

COULD GO EITHER WAY
Art Style. I think the stick figures are great, but they're not everyone's cup of tea.

WHY TO TRY IT
You don't have to install or download anything and it's free.


LIKE
Character creator. Best character creator ever.
Loads of Customization Options (including the ability to customize what colors your powers use)
Great-looking world
Free to play

DISLIKE
slower-paced combat for the most part
can get grindy
there's only so many sewers, warehouses, and office buildings you want to go into
Very limited character slots for free to play
PVP not a big thing (from what I experienced)

COULD GO EITHER WAY
Loot (or lack thereof). You get stuff to customize your powers, potionlike stuff, and crafting stuff, but no gear.

WHY TO TRY IT
Because the character creator is beyond awesome. Seriously, it alone is worth the download. Also, it's the granddaddy of all superhero MMOs. Oh, and you can fly and beat up bad guys (or good guys).

So there you have it.  This year I'm hoping to continue trying new to me MMOs, starting with EQ2, and possibly hitting up Age of Conan, Warhammer Online, and whatever else sounds shiny and free. If you'd like to suggest a free to play MMO (or you want me to try a pay to play and are willing to pay for a subscription and box), comment or hit me up on twitter or email.
Posted by Melfina at 2:47 PM 2 comments: