I'm going to put BETA in all posts discussing any aspect of the beta, so that people can avoid spoilers.  If I need to do more, please let me know.  I am going to try to avoid discussion of plot and zone changes as much as I can, but if something is OMG Amazing, well, I may not be able to resist squeeing.

Anyway...
thus far there has been a great deal of waiting to download, some crashing, some cowering, and a few nifty discoveries. I have yet to make it to a new zone (heck I'm having issues just getting Lyllea out of Northrend), but I have learned some important things.

One, Darnassus was not a good place to have Lyllea parked when I transfered her. I actually had to retransfer her (once I moved her to Dal), because she was stuck. I'm now having issues trying to make it off the continent via portal to Stormwind. My baby mage is also in Stormwind, and I can't load her either, but I suspect that has more to do with lack of zone info (the download's not complete) then anything else.

Two, beta is buggy. Very buggy.  Like randomly not being able to click on anything buggy. Like cowering every time you log in buggy. Like, um, crashing the game by casting levitate buggy.  Yes, buggy.  Did I mention the bugs? Good thing Blizz has me to point them out, right? Well, me and about 50k other people.

Three, the talent trees. Weird. I'm still getting used to the idea that you kinda have to fill out rows.

Without further ado... Random Screencaps!  Because I can.
The talent tree, to explain what I mean by filling out the rows.  That's shadow. 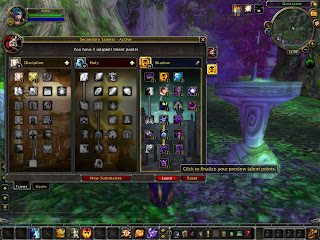 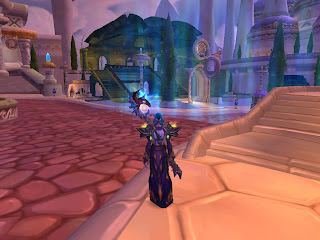 Power Word: Stand in the shiny for once 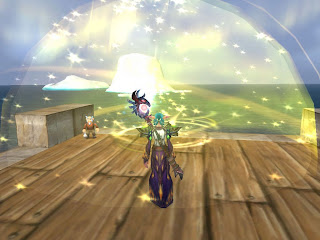 Yeah, just before DragonCon, I get beta access. I think Blizz may be torturing me.

But I have transfered over Lyllea and my baby mage so far, and will probably try a pregen hunter.  Lyllea was an obvious choice, being the main and all, and the mage will give me an idea of how the leveling experience is mid-range.  Most of what I've seen is focused on the starting zones and end-game, so I figure finding out about the middle might be good.

Any requests? Anything you really want to know, want screencaps of, or just my opinion on? Number-crunching isn't my forte, but I can tell you stuff like "shadow priests feel op" or "wow, focus is annoying" or "gah, disc not so fun anymore".  Not really hard number stuff, but it gives you an idea of things (and the three above are random examples and may or may not be true. I dunno, I just started the download).

This doesn't mean I'll stop playing Wraith. It just means I have slightly more to talk about and that my boredom is less.  Both are good things imho.  And there's stuff I still want to do in Wraith, like get the boomkin to 80 (78 and leveling), and prepare for Cat and um, possibly level the shaman more.  Dunno if I'll get to that or not.

And I got to do a few Ulduar hard modes this week, which made me happy. 4 towers FL is hard, even in ICC gear.  The flowers keep eating our faces. Not much else to say, frantically prepping for DragonCon. Not sure why I thought dressing as a draenei would be a good idea, but now I have to find horns and makeup.
Posted by Melfina at 9:35 PM No comments:

NOOOOOO!!
Not VOLLEY!
Anything but Volley!
How am I supposed to top DPS charts now?!?
Next you'll be taking away Mind Sear.  40k dps is not overpowered.  Nope.  Not in the slightest.

And now what do I use to hit multiple mobs? Multishot? I have a multishot? Oh yeah, the thing I tend to hit by accident in Steamvaults and pull mobs off Boo.  I don't like that shot. I don't wanna use that show.
WAAAAAAAAAH!  MEAN BLIZZARD'S TAKING MY BEST TOYS! WAAAAAH!

(above is all in good fun. I like Volley, I will certainly miss Volley, but I trust Blizz.  And if they screw up, that's what I have a well-geared disc/shadow priest for, right?  And yes, a 40kdps mind sear. Many grouped mobs + mind sear + icc buff= insane dps)
Posted by Melfina at 11:59 AM No comments:

I am fighting the pre-Cat blogger slump.  Wow, exciting, I know.

Anyway....
I've done more raiding this past week than I have in a long time.  Two ICC 10s, one 25, and two weeklies.  Having two mains (or rather one main and one raiding alt who needs emblems and gear) is a bit more work than I thought it was going to be.  It was nice to pew pew stuff again as a hunter, and I even got a new trinket to replace my Naxx trinket. Now if I could just replace all my other gear (except the two piece tier 9) I'd be good.

So far I do enjoy raiding with my new guild. And 4 piece tier 10 shadow, SO SEXY.  I am never ever getting rid of it. It makes my dps priority simpler, what's not to love?

Without 4 piece, shadow dps goes like...
Devouring Plague
Vampiric Touch
Mind Blast
Mind Flay
Shadow Word: Pain
Then keep all three dots up, while Mind Blasting every time it's off cooldown and using Mind Flay as a filler.  SW:P more or less keeps itself up, since Mind Flay refreshes it, but the other two have to be watched (and have different durations and casting times).

With 4 piece
No more Mind Blast.  So instead of watching 5 spells like a hawk, I only watch 4.  Granted, the faster Mind Flay takes a bit of getting used to, but so worth it.  And the faster MF means movement isn't quite as painful, which is nice too.

Okay, not much in the way of actual interesting content, I know.  I'm kinda flailing for topics right now.
Posted by Melfina at 12:31 PM No comments:

GQuitting should be more dramatic

Yup, Lyllea left Silver Dragoons this morning. She's going to Murderotica where they run 10 mans and 25 mans in conjunction with another guild, raids start on time, and they have fun.  In fact, I hopped on their vent for my trial and thought for a moment I'd gotten onto SD's instead.  I wanted fun raiding, with a side order of competency, and both 10s and 25s and they have it.

Now for a flashback...
When I started raiding on my hunter (and first 80) I raided with SD.  At the time, we had enough people to run 10s and even run 25s with another guild. I have very fond memories of the fun we had then, and Murderotica's raid reminded me of that time, when I was a noobish hunter constantly running oom and trying my best to hit the top of the meters while squealing at new shines.

Murderotica may not be horribly progressed (11/12 icc 10, not sure on 25 but I know Positive Push is further along and they're 11/12) but the lure of having a blast while raiding trumps progression, at least for me.  Plus I might actually get to see Ruby Sanctum, without pugging.  I'm not sure I want to pug any place that requires crowd control.

Other stuff:
There's a guild on my server selling rusted proto-drake runs.  I want.  I want really badly.  That drake and the skeletal blue one are the best-looking mounts in the expansion, imho, plus I want to see all of Ulduar.  It's 20k, so I need to start playing the AH instead of dabbling in it.  So far I'm selling...
1) Cut epic gems (including the ones I get from transmuting)
2) Netherweave bags (my shaman's finally high enough in tailoring to make them and while the profit margin isn't huge, they do sell very reliably)
3) Enchanting mats (and some enchants)
4) Vellums
I'm considering dipping my toe in the Darkmoon Faire deck market again, but I suspect the most profit is to be made by assembling complete decks, getting the trinkets, and selling them, rather than selling the decks or single cards.  That makes this into more of a long-term project.

Since I have Alchemy, JCing, Enchanting, Inscription, Herbalism, and Mining all maxed on at least one toon, I figure I should be able to make a nice chunk of change. I'll let you know how it goes.
Posted by Melfina at 11:12 AM 2 comments:

Okay, the RL boss needs to stop criting me...

Yeah, it's been a crazy week.  Craziness is likely to continue.  Stupid RL boss, stuck in crazy phase.

In wow news, I did manage to trial with a guild, and have heard nothing since. Given that my trial was on Wed, and it's now Mon of the following week, I'm not sure what to think.  I did just send a ingame mail thanking the officer for letting me come, and complimenting her on her group.  It was a lot of fun to run with them, and I do hope I get in.  They aren't SERIOUS raiders, more social competent with a side order of fun, which is what I was looking for.

I'm also now signed up to try for the Immortal with pp. I need to figure out where to practice the mind soothe/mind control thing ahead of time, and review the fights.  It's been a while since Naxx.

Silver Dragoons did manage to get into ICC 10 this week, and got 4 down with some struggles.  One undergeared healer and me makes for me running through my mana pool like water.  I also encountered a pug'd holy priest who did not use coh.  Always thought that was a defining ability of the spec, and given that the priest was a Kingslayer, I was a bit confused.

Now must dash. RL boss has launched another "Take parent to doctor" attack.
Posted by Melfina at 2:08 PM 1 comment: