It's a brave new world out there now. 4.0 is hitting (and breaking) the servers, and well, I dunno about you but I thought I had another week or so to prepare.

So, yup, I am NOT prepared. I know what pet I'm using (yay Dragonhawk), but I have no idea of hunter specs, rotations, or glyphs.  I know disc has two viable specs, smite and um, not smite, and there's this handy-dandy explanation and specs and stuff which I will be using. But shadow, yeah, shadow I have no clue. My current rotation was working in the Cat beta, so I may stick to that. As far as the pally and druid go, well, um, I know I have holy power on one and an eclipse bar on the other.

My current plans when the server comes back up are....
1) Cut and post every bold and bright cardinal ruby I can get my hands on. Lots of regemming will hopefully=good profit.
2) See what the glyph market looks like. Jump in. Again, hopefully yay profit. My gold reserves are low due to gearing Adowa, so I'm trying to get some saved back up before Cat.
3) Go get the corehound I want
4) Get Lyllea's shadow spec figured out.
5) Make a ton of mouseover macros for disc healing. I'm expecting Vuhdo to be borked. Actually I'm expecting my entire UI to be borked.

It was rather interesting seeing what people were doing last night. Many of my guildies were trying to get Explorer or Dungeon Hero achieves. Me, well, I spent 8ish hours getting this 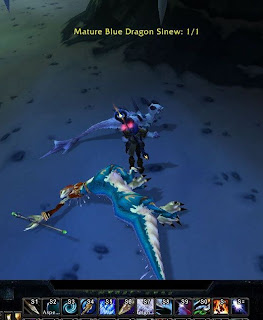 an item with a 1/1000 drop rate of elites in Winterspring. And why? 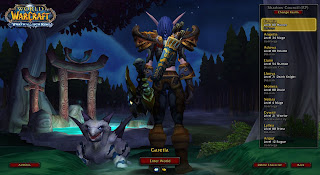 Because a) I knew I wouldn't be able to do it once 4.0 hit, b) it's a piece of WoW history, and c) it looks DAMN sexy. Yup, I got me the epic quiver from Vanilla WoW just before quivers turned into bags. I'm kinda hoping the appearance stays after it's changed, but I'm not expecting it. Oh, I really wouldn't recommend farming for something with a 1/1000 drop rate when you've only got hours left before it's gone forever. It's a BIT stressful. So go get those Azure Whelplings now folks! (I got one yesterday, but I'm going to try for at least one more so I can keep one and sell one for a ridiculous amount of gold).
Posted by Melfina at 2:35 PM