3/12 BABY!
It took every mana cooldown I had (shadowfiend, Hymn of Hope, Concentration potion, mana tide (twice!), a spirit trinket) and then some, but Halfus has fallen! 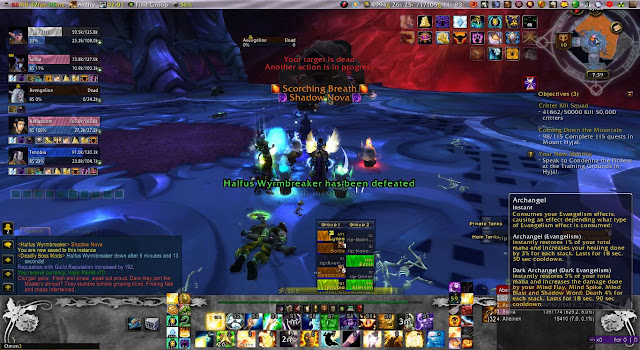 Also, yes that is me healing in a raid for the first time in quite a while. Our resto druid had Oscar aggro, so I had to go heals. Oddly enough I was at an Oscar get-together while raiding, and I have no idea who won anything, but I do know that Cate Blanchett's dress looked like a very badly designed WoW guild tabard.

It was a lot of fun to heal again, and I need to go through and revise some of my ui, macro shadowfiend so I can keep the tank targeted, and remember that I have more buttons than PW:S, Penance, Greater Heal, and bouncy healy spell. Also, is Archangel for mana regen worth it at all? I need to figure that out too.  I know I love it for shadow, but dark archangel is 5% mana return, not 1%.

Fight-wise, the healing got easier as the fight went on. That was good as by the end we were all healing on fumes. I healed a bear tank and threw around bubbles and such on raid/other tank when I had the GCDs and mana, our resto shaman got to raid-heal by their lonesome, and our pally healer had the pally tank. A pretty sub-optimal healing makeup, really, but we made it work.

And no, I have no idea what Raid Achievement Rank means, but I like that ranking better than the others, cause it makes us seem more awesome.
Posted by Melfina at 12:58 AM