I've been playing LotRO again, mostly because the 5th anniversary event is ongoing (and well worth a look, I shall post details on it later and here's a useful guide). Anyway, it got me thinking about world events in LotRO vs WoW, and then more generally about achievements in WoW vs deeds in LotRO, and what I like and dislike about both.

W achievements have always been more of a max level thing to me, just something else you can do once you hit max level. Yes, there's many you can do while leveling, but most of them do seem far more like max-level things. This is even more true of W holiday events. I can think of one holiday where I could get most to all of the achievements done at a low level (Noblegarden, and even then you want to be at least in your 40s to get to UnGoro and Silithus and survive without help). Yes, there's stuff you can do in most if not all holidays before max level, but you're unlikely to be able to get all the achievements or the titles. And let's face it, most achieves don't give you anything (except possibly bragging rights).

Now, L deeds are pretty different. There's a ton more of them, first off, and they're so much more accessable. To give an example, my hunter is now level 25. Max level is 75 (I think). In the past two days I've managed to get two holiday titles (Master Blaster and another one I can't remember right now), plus here's the current deeds available to me in the zone I'm leveling in (and this does not count any of the class (hunter) or race (Elf) deeds also available)...
EXPLORER DEEDS (go find places)
Strongholds exploration, Eastern Ruins, Villages of the Earthkin, Western Ruins
REPUTATION DEEDS
Of Glories Long Past (intial, advanced and final)->go do quests in this zone (15, 30, 45)
(not the actual name) gain various levels of rep with the Rangers of Esteldin and there's 4 of these
SLAYER DEEDS (kill things and take their stuff)
Goblin-Slayer, Redeemer, Orc Slayer, Worg Slayer, Troll Slayer, and Worm Slayer. Each one of these has two levels and there's three more involving Stoneheight (I haven't been in this zone long, so I have no idea what those are about)

That's just one leveling zone. Now, I don't have to do all of those, and some of them I'll likely just end up getting done while questing, but still, that's a lot of options. Every zone has a list like this, and some have many more (Breelands, I'm looking at you).

Now, part of the reason there's so many deeds is that you use deeds to customize and spec your character. You complete class deeds (use x shot y times) to get nifty abilities, and you combine those to spec your character. You complete other deeds to get bonuses to abilities you can equip, and also probably get a title or two. It can be a bit grindy, but on the flip side, there's always something you can be doing that isn't rushing to max level. And here's a list of all the various kinds of deeds, thanks to lotro wiki.

Holiday-wise, again, the focus does not seem to be as much on max level.  My hunter is 50 levels below end game, and she's gotten two titles, a bunch of deeds, and two mounts thus far (in 3 days), with at least one more mount she can buy (through winning horse races, doing anniversary quests, and getting a 200 silver mount ownership thing) and a couple more mounts (and emotes and I believe some other stuff) available through quest loot RNG.  Granted, one of the holiday quests is level 30 (and the travel required took me through level 38 mobs), but I was still able to do it (and it was awesome)!

I like L's deeds more, but they are a bit overwhelming. I log in, go "um, what am I doing?" and often just log out again. I've found that making a list (I'm going to go get all the holiday quests done, then quest in North Downs for a bit, then go farm) helps me stay focused so I don't get overwhelmed. But then again, I've been known to do the exact same thing in W once I hit 85. I don't level to reach endgame in L, so the XP bar is not the same incentive it is in W.  I like that, and I don't. It means I don't have the same automatic thing to do when I log in, but it also means I can wander around much more, smell the roses, and generally ignore my leveling speed without feeling vaguely guilty about it.

I'd love to see WoW focus a bit more on the leveling game (like LotRO), but I also know that I don't expect that from WoW. WoW is an endgame-focused game and LotRO is not (in my perception, which of course is skewed by not having any toons anywhere near max level).

In conclusion, I HAVE A FIREWORKS HORSE! Now I just need to get an outfit to match... 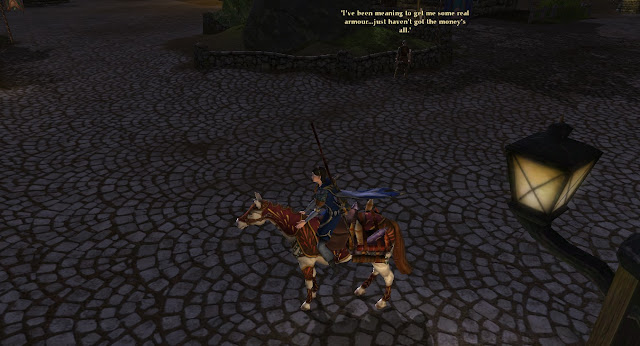