WoW doldrums continue. In fact, I've been in far more of a reading mood than anything else lately, but this is not "the Bibliophile Noob". So, mmo content....

Lotro's doing their spring festival, just in time for summer! It broke 90F here, it's summer, darn it. Anyway, what I've done of it was fairly entertaining, there seems to be much more to do than there was during the Anniversary festival, but that also makes it much more time-consuming. Since I also want to level, this is a bit of a problem. I think I've spent 3-4 hours on it, and I've yet to do anything related to the maze or the horsefields. So, tons of content, yay, loads of travel not as much yay, but between a personal house in the elven neighborhood, a guild house (for most of my toons) in the Shire neighborhood, and hearths/milestones set to Bree, it could be worse. Plus my hunter can just port.

I did have an interesting new experience. My kinship (guild) did an official dungeon run of the Maze in the Great Barrows. Sadly, I have no screencaps of it. It was a very long slog (especially since our minstrel healer bailed on us after the second wipe without a word), and there was a lot of wiping, and we ended up having to reset the level (dungeons in lotro can be set to various levels). We'd started at 35, with a lvl 29 melee dps, me as ranged dps at 32, minstrel at 36ish I think, another melee dps at 37, and our fearless leader's in the 40s or 50s.  We ended up pulling in another captain (our fearless leader's one) in the 50s, but just couldn't down the end bosses without healing. Reset to lvl 25ish and the only one who died was me (I don't have an aggro dump yet, and let's face it, I'm really used to having one in groups).  I am trying to level my minstrel now, so we don't have that problem again, but well, slow. I'm thinking skirmishes, and lots of them. It'll let me practice minstrel healing and the mercenary/pet warrior can do more damage than me.

And there was house-buying. I already owned a small house, but I traded up. The only problem I have with lotro's housing (other than one house per server) is that they only create new neighborhoods when the old ones are full. Since there's 3 types of housing (small, deluxe, and guild) and various placements in the neighborhood are often considered more desirable, I couldn't get (any of the 5) addresses I wanted in any Elven neighborhood. But I did find a compromise location, and see, it's still pretty... (the windmill on the left is my addition) 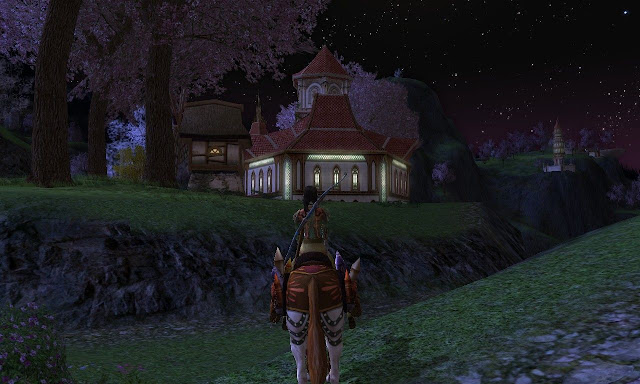 And last, but not least, here's something I discovered and found amusing while leveling farming... 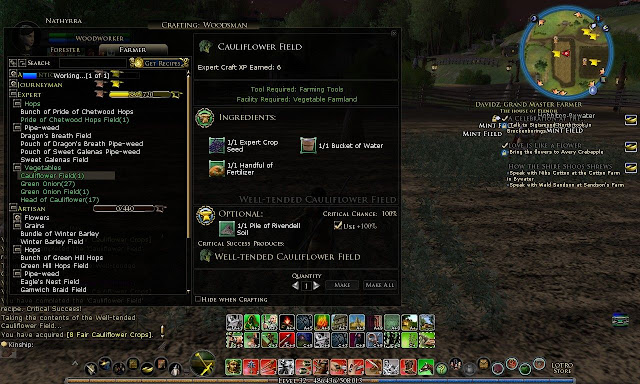 Notice that green vegetable next to the Cauliflower Field entry? Isn't that broccoli? Oh, and I maxed out Expert, got Artisan past the red bar stage, and started the next level (Master?).
Posted by Melfina at 2:02 AM