Tried ESO Again, Was Enthralled, Thrilled, and Had Loads of FUN!

I tried ESO in 2014, and while the explorer in me was thrilled, I couldn't get past the combat (and my ineptitude at same). I knew the Tamriel Unlimited thing had changed the game hugely, and likely in a way I'd like, but it wasn't until I happened to read that they were adding Morrowind that I felt the need to try again. I got the Elder Scrolls III: Morrowind in college, several months before I got a new PC that could actually play it, and I read that instruction manual (remember those?) over and over again, wanting to play it so badly! I loved it, and while I never got very far (Morrowind has some issues that frustrated me too much at the time, and since, really), that world was amazing.

So, I bought the Morrowind expansion for ESO, and jumped in last night. After a brief period of "WTF do any of these keys do?" I figured my best bet was to roll a new toon, and since Morrowind added wardens, I could try one of them too. A few minutes in character creation (and okay, an hour or so in the tutorial since I did NOT remember how to play at all), and here we are. Yes, I have a wolf and a clockwork horse. Yes, I am firmly convinced this is awesome, even if I walk everywhere. 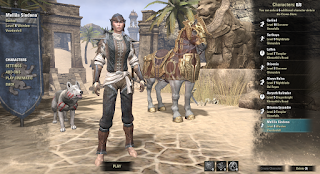 The warden is a bit more mage than I was expecting (I think warden, I think paladin-like), but I have to admit, after many hours cursing cliff divers in the original Morrowind, it's ridiculously entertaining to use them like magic missiles against my enemies. Plus I heal with growing fungus and throw ice at people and sometimes they freeze and shatter!

I played for 6 hours and did not want to stop. So, here's some highlights... 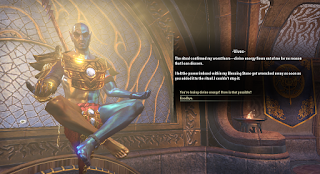 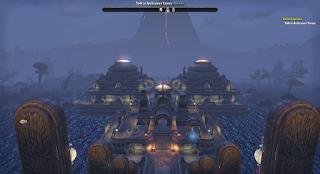 He also lives in a very lovely city (Vivec City, naturally). Which I got lost in. Repeatedly. In both Morrowinds. 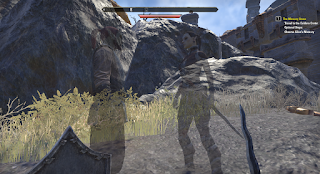 I wandered around Balmora to store an old man's memories. I was very surprised how touching I found that quest line, it's a great one about family and love and regrets. 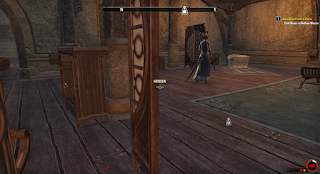 I became a semi-smooth criminal when I got confused about a quest and broke into a house. Since I'd already trespassed, I went for broke, snuck around, ducked into hiding places (which are highlighted when you're trespassing and sneaking), robbed the place, murdered a couple henchmen, then ran for my life/filthy ill-gotten gains back to Vivec City to get the bounty removed and my lovely new shinies sold. It was really suspenseful and enjoyable, and it was a nice break from normal questing. I still stink at the lockpicking game though. I should see if I can find an offline version to practice with... 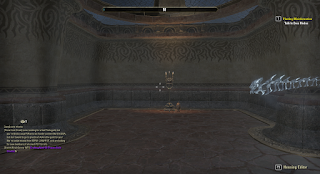 I got my own room at an inn (aka the first piece of player housing). Yes, I had a total of one piece of furniture that'd dropped during the night at some point, and that skeleton thingy is one of the non-combat pets I have (no clue when or how I got it).

And last, but not least, even if I didn't remember to take screencaps, I went on an epic quest for pumpkins! It's part of the ongoing holiday stuff, and I haven't finished the quest yet. I'm blaming it being 4 am by that point for lack of pics, but I went from Vivec City to Stonefalls (and halfway across that zone even though it's not this toon's faction) to get a few, and then to Glenumbra (what would be her starting zone if not for Morrowind).

While I was doing this, I got REALLY fed up with the lack of bag space, and someone in the zone chat said I should sub for the crafting bag. Wow, they were right. Basically, all the crafting stuff you pick up goes in an unlimited bag shared across all characters and it is BRILLIANT. This is possibly my new favorite feature ever.

(And my apologies for the UI in every screenshot. I need to figure out which button makes that go away and add it to the list...)
Posted by Melfina at 12:20 PM