Links for Vudho, and a better screenie

I should not post that late at night. I just shouldn't. I forget things like, say, links.
Vuhdo is on curse here
The 80+ thread on Vuhdo on the Plus heal forums is there
and last, but not least, the VuhDo wiki is there.

I will be going out of town this week, so the blog may be a bit light on content. But did you know that there's a new achievement for collecting all the rare pets (the crocs, raptors, and whelplings at least) that's been datamined? Guess I should bite the bullet and get farming. Cause once that's introduced, the prices will go up, and they're already high.

Raiding frustrations were discussed with guild leadership (aka my friend Fi, the awesome-sauce healer) and we'll be doing hit head against wall for bit (with the wall being either Ony or TOC), then hit Ulduar.

And last, but not least, the priest's current raid setup. Or rather, BG setup, since she hasn't raided yet and is unlikely to till 80. 5 mans, yeah, raids no. She has been doing a lot of pvp, since I've discovered the fun of it. Granted, the only BGs I actually really understand are Eye and WSG, but run behind and heal seems to work in all of them. The druids do keep beating me on the meters, but a) I'm mitigation far more than healing (since I can PW:S while moving), and b) if I have a spell I can move and heal with, I don't know what it is. My damage is laughable, but my healing's what counts. I did switch out shadowed unit frames for pitbull, but we'll see if I keep it. I love the look of the portraits like that, but the options confuse me, and I ended up adding vuhdo to my hunter's ui just so I had some sort of raid frames I knew how to fiddle with. 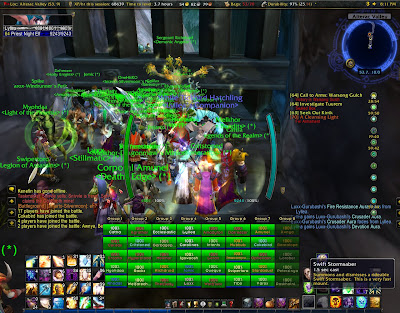