And Now For Something Completely Different

Okay, not completely different, just sort of. I've been dealing with WoW boredom, and that combined with rewatching the LotR trilogy inspired me to try LotRO again. I have played it before, and enjoyed it, but then I started WoW and it ate my brain and yeah, it's been years. Like 3 of them.

First off, I had to remember what server my toons were on. Since, unlike WoW, Lotro is not so nice with the switching servers bit, it took a while. I finally found them on Gladden, and figured my hunter would be the easiest to jump into. Boy, was I wrong. Hunters in lotro are more like mages in WoW, glass cannons who depend on CC and really fast dps.  No pets, just traps and nerves of steel.  Also, a really pretty world and ooh, I can make my own bows! (I love being able to do that). Here we see my hunter wandering through Erid Luin, with her crafted bow clearly visible. See, very pretty! 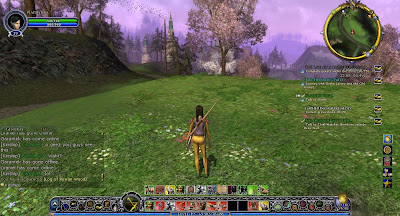 There's a lot of stuff I miss when I play lotro. For one, all my buttons are different! I am slowly remapping them, but it's a bit of a pain. I also miss addons, and um, actually having enough cash to train skills. I am broke. Really broke. Like, can you spare me 50 silver so I can go train a skill I got access to 5 levels ago broke. I'm attempting to try the AH there, which just made me miss Auctioneer. Also, I don't have much of a clue what my various toons (hunter, minstrel, and captain) need profession-wise so I'm never sure what to sell and what to keep.

Is LotRO going to replace WoW for me? History says probably not. I played LotRO last time for about 7 months and got bored. WoW's held my attention more or less for almost 3 years now. But there are things in LotRO I loved, like the crafting and the customization and the achievements with titles and possibly the housing. Due to the lack of cash, I've never actually had a house, but I suspect I'd enjoy it.  And with LotRO now free to play, I see no reason not to wander into Middle Earth now and again, even if it's just to chop some logs and remind myself why WoW priests trump LotRO minstrels any day of the week.
Posted by Melfina at 11:37 PM