I didn't want to stop!

I logged on today to fiddle around on the rogue, maybe use up her rested xp.  4 hours and 4 levels later, it took way too much willpower to log off so I could a) write this post, and b) go to bed.  All I did was quest, and it was SO MUCH FUN!

First, there was running through the rather long questline in Darkshore to get... 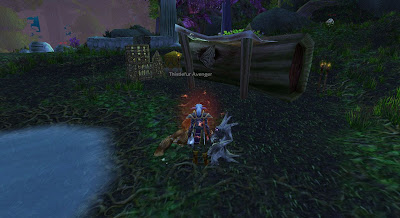 my very own not-so-little pet treant. His name is Withers, and he's taller than a gnome atm, but will shrink.  The questline for the Alliance starts with the beginning quests in Darkshore, and is detailed here on wowhead.  Horde can just buy him, I think. I think I'll be picking him up on a lot of my toons, he's cute.

Then there was massive questing through Ashenvale. I've done over half the quests in the zone at this point, and have outleveled a few already. I'm still going to go back and do them, since this zone is pretty epic. For example... 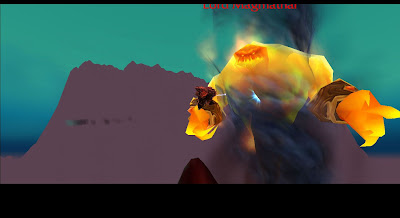 that's me in a wind elemental fighting the fire guy who set Ashenvale on fire. There's also a great quest that made me want to slaughter all the orcs I could find.  They're killing Laughing Sisters while a good chunk of the forest they want is on FIRE and you have to go recover these corpses. It just made me really angry that orcs would be stupid enough to slaughter these dryads while there's this huge volcano thing going on. Hopefully the horde side of things has some quests to deal with that too.

So the new Ashenvale gets a pretty enthusiastic thumbs up from me. If you're Alliance, it's well worth the questing, even if you did it before Cat. Garetia did every single quest in the zone, and while some of them are familiar, Blizz has managed to make even the familiar ones fresh and new.

Plus... who doesn't love random tentacles? 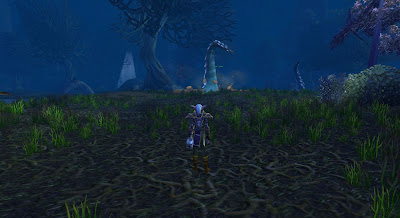 Oh, and in case you were wondering, there are two other pets I'm aware of that are new since the Sundering and available via questing...
Brezie's Sunflower which is available through the Plants vs Zombies quests.
Tiny Flamefly which is available in Burning Stepps. Link goes to Alliance version, though I'd guess there's a horde version too.
I'll eventually be picking both of these up, if I can ever manage to stop questing on the rogue.
Posted by Melfina at 11:37 PM