It's the end of the world as we know it, and I'm happy

So, Deathwing has awoken, the world is shattered and I've got a huge smile on my face.

Important/Nifty Things:
1. The notice board in the capital cities gives breadcrumb quests appropriate to level. My rogue was sent to Ashenvale, for example.
2. The city quartermasters are near the flightmasters.
3. No, you can't fly in azeroth yet, that's coming with the patch.
4. Yes, you can roll a Tauren Pally, or dwarf shaman, but not a worgen or goblin anything.
5. The Explorer achievements seem to be bugged atm. My priest now has everything in Kalimdor and Eastern Kingdoms explored except the starting zones. This varies by level, if you are 60 or higher you may now have these achieves.
6. Loremaster counts have been wiped. I personally am hoping it's a bug.
7. Yes, the portals are gone from Shat and Dal.
8. You can now fly to the Exodar. FINALLY!
9. The quest panel now shows you a picture of the particular quest mob you're going after for some quests, plus gives you a skull on the minimap. 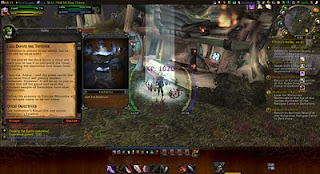 10. The cursor has now changed when you're fishing. It's an awesome touch.
Posted by Melfina at 10:07 PM