Waiting for Godot. Or Cataclysm. Whichever

Well, the last frantic push to "finish" raiding in WotLK is on. My guild, the ever awesome Murderotica, is 9/12 in heroic 10 man ICC, missing only Dreamwalker, Sindy, and Arthas.  Oddly enough, we had Blood Queen heroic on farm long before we defeated Blood Princes. Go figure. And wow, it's weird to call Murderotica my guild. Silver Dragoons was home for a long time, but now I feel more comfortable when I'm logged on a toon in Murderotica than I do when I'm logged on a toon in SD.  SD's kinda shifted, and I don't spend as much time there as I do in Murder, and I don't raid with them. I miss raiding with Fidelma and Gariath and Jes and Kana, but I'm less thrilled by raiding with some of the new members, and I really don't miss raids that never started on time.

Hopefully on Sunday I'll have a Sindy kill to report. I know we can do it.  And in a couple of weeks, I will hopefully have my very own sexy drake.

Otherwise, there's not much happening in my wow-verse. I'm leveling the rogue like mad, and having a blast wandering around the Southern Barrens. I've dabbled in the new fishing and cooking quests, but my 80s are mostly neglected. Economics-wise, I've been dabbling in the pet and vanishing powder markets, since epic gems are, well, kaput. It does never cease to amaze me that a pet you can buy in Dal for 40 gold sells in the AH for 100g. Yay lazy people, I guess.

I have laid in a supply of coffee for Monday, and while I am not happy about the servers going up at 12 PST (since that's 3 am my time), I am looking forward to my first midnight opening, and 3 hours gives me plenty of time to install, patch, and pray that the server gods look favorably upon me.

Oh, and word of advice. If you want to level quickly, get herbalism and mining as your professions. See the XP in that screeny? That's a bit more than I'd get for a single mob kill.  Grabbing all those yellow dots adds up REALLY quickly. 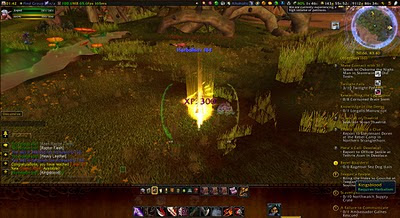 And yes, that's the rogue's UI. I mostly like it, but if I was raiding with it, I'd do some fiddling, make everything match, that sort of thing. I need to fiddle with Lyllea's UI, the default casting bar keeps showing up and I have to reload ui to make it go away. But since the Cat install will probably break a lot of my addons anyway, I'm thinking it's time to start from scratch again, see what I can come up with.
Posted by Melfina at 2:19 PM