Stuff I've been up to in WoW

Other than transmog? Okay, quite a bit of transmog. Lookie at the newest outfits! 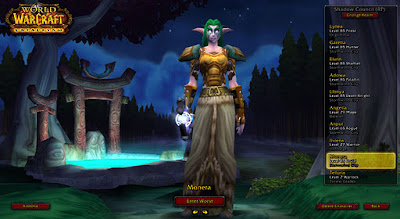 Monera's new outfit, based around that pretty leather skirt. All pieces except belt and staff are low-level AH stuff. The staff will be replaced, once I find one I like better.

Garetia's new mail outfit. Not ideal yet, but I like the green theme. Based around the tunic, a dungeon quest reward from Auchenai Crypts. All other bits were either already in bags, purchased on the AH, or crafted. 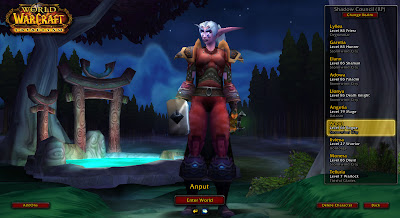 And here we see Anput, my rogue. She's also rocking a chest from that same quest as Garetia is, just leather instead of mail. The pants are again AH, found while I was trying to put together Monera's outfit. Otherwise it's a mix of heirlooms, level 60 pvp gear, and the dagger is Fangs of the Father, a dungeon drop (don't ask me which dungeon, she's run 7 in the past few days and they've all run together).

Otherwise, there's been a lot of gearing up Eiunn the shaman, who is now 3/8 DS 10 as elemental and 4/8 DS LFR as resto. I've run a lot of the new 5 mans, and come to some conclusions.
1) caster mail is a myth
2) Echo of Sylvannas stinks
3) Thrall is this expansion's CoT Arthas.

Lyllea's 8/8 in LFR, and 4/8 in DS 10. We're running hard into the DPS check on Ultra (due to 3 healing it in normal Firelands gear), and have developed a great dislike of Warlord Buggy'McBuggyPants. I've gotten some tier from LFR, and while it looks like Lyl's 359 boots are never getting replaced, I did get a new main hand, so I can't complain much.

My DK's next in line for gearing, but it's hard to convince myself to run those 5 mans another 7 times after running them on Lyl (to cap valor if I don't want to deal with the stupid of LFR) and Eiunn (damn you caster mail, DROP!). So instead I've actually been leveling. In fact, at this point all of my alts on Shadow Council have run through all their rested XP. My mage is almost to 80, the rogue's 66, and even the warrior got some love (and a Blackfathoms run of "hit all the buttons because EJ has either failed me on a fury guide or I'm very tired and looking in the wrong place"). I also rolled a lock Horde-side to help Redeemed with Stay Classy. I'm looking forward to getting her into PVP, mostly because a) 7 heirlooms=OP, and b) an undead running around with gnome pigtails just seems extra evil.

Other than that, I've gotten into some achievement runs on various toons, and I'm dabbling my toe into the crafting transmog market. Eiunn's picked up both Ulduar and BT leatherworking and/or tailoring patterns, so I'm planning on making one or two, see if they'll sell. All this transmog is a bit hard on the old gold reserves, after all, and if I don't do something I might have to *GASP!* do dailies.

So that's what I've been up to during this radio silence. Now, off to bed, and before I forget...

HAPPY MIDWINTER HOLIDAY OF YOUR CHOICE!!
Posted by Melfina at 9:56 PM