Transmogging without a set, how to create an original look

So, I've been doing a lot of trying to figure out how to transmog stuff so I get unique and also nice-looking gear. And I figured I'd write up what I've come up with.

First, and foremost, get a addon that shows you what gear looks like on your toon. I love MogIt, but I'm sure there's plenty out there to choose from.

Second, run old stuff. My server has a lovely channel called achievements, and you can generally find at least one old raid going on at peak times. Look for mount runs, achievement runs, that sort of thing. Personally I don't pick my raid based on what it might drop, I pick it based on how much I like going there. That way any cool drops are just a neat bonus. But it is best to go in without a preconceived notion of what you're going for, so that you're more open to new things. I didn't go into Black Temple thinking I was going to get a shield, but I did. Also, I discovered there's a kick-arse mace in there, so it looks like my DK may be doing some farming.

Third, keep an eye out while leveling alts. I've already found a sword that I want to get on as many toons as possible, simply because it looks cool.

Now, you should hopefully have a good selection of gear at this point. Now comes the hard part, creating a look from this selection. Here's one way (the way I find the easiest) to do it...

Step 1) Find your favorite piece. Ideally you want something that's going to be obvious on your toon, like a chest or shield or staff or shoulders.  This piece is what you're going to build your set around. In the case of Lyl, I started with the current priest tier shoulders.

Step 2) Gather all that gear you've been collecting. Hit the transmog guy and start experimenting. Keep in mind a few simple things, like matching colors and keeping the ornateness/simplicity of the gear more or less equivalent to your favorite piece. Generally you'll want to go with simpler looking gear than your favorite piece so the rest of the set doesn't distract. Also keep in mind that enchants on your gear will still be visible, so you generally don't want to transmog your nice sword with the glowing red enchant to the blue lightsaber.

Step 3) Now hopefully you've got at least the beginnings of a set. Start farming to fill in any slots, and don't forget about hitting the AH. Cheap leveling greens often have a nice look, and your friendly tailor can make some nice things too (like the black mageweave headpiece, or the admiral's hat). Heck, the Fel Iron sword is pretty darn neat-looking too, and that shouldn't be too hard to hunt down from a blacksmith.

Now, to put my money where my mouth is, here's my current looks...
Lyllea, starting with the current priest shoulders, adding a splash of Ulduar, tier 11 (the boots), and even a staff from Scarlet Monastery, which you'll have to actually go to the Armory to see, since I can't figure out how to change her pose to show it. I have no idea which tabard that is, since I don't have one that matches.

Eiunn, who is still a work in progress, first in what she's currently wearing (and yes, I need either a top with green or pants and shield with blue)...

And second, in an earlier version...(yes, that's not the best screencap ever, sorry). Since this cap, I've picked up a shield from Black Temple, cursed my legs for not matching, and gotten rid of the helm. Cool helm, but I didn't have anything else that matched it. 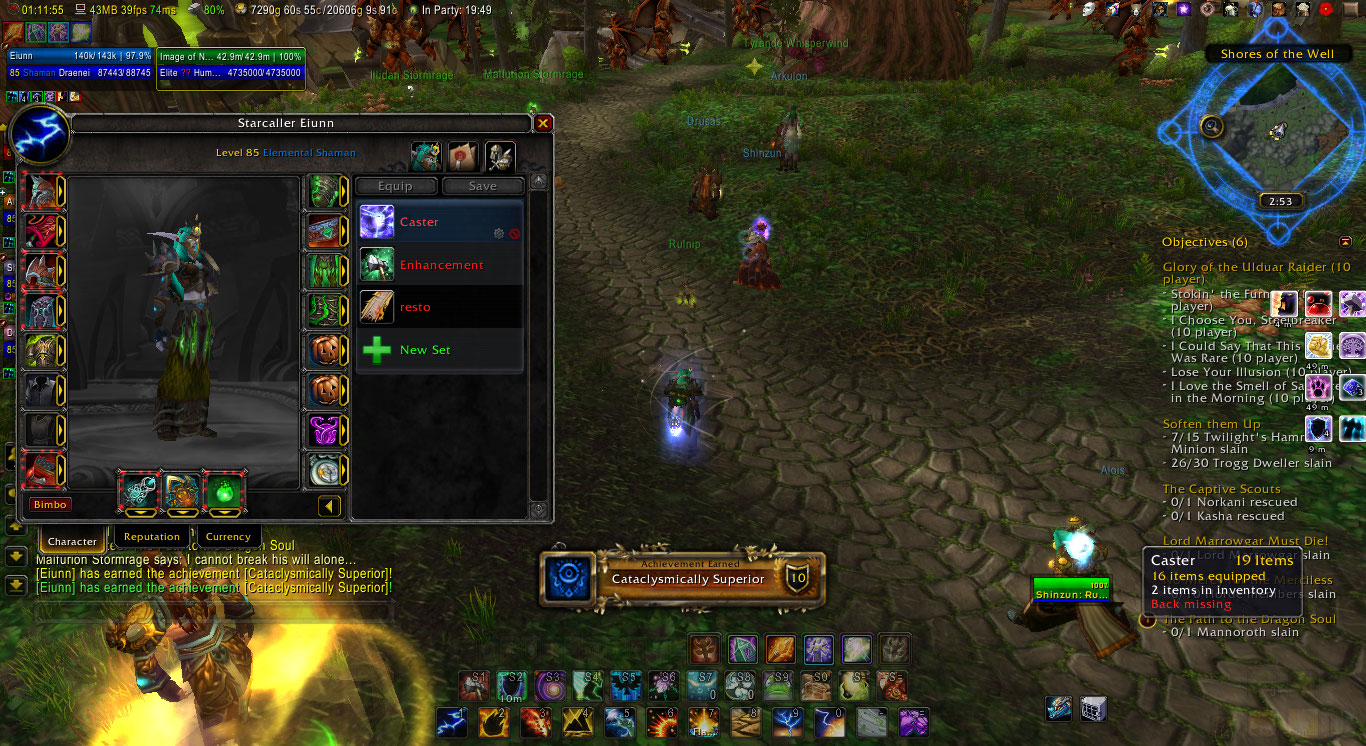 Here's my DK, Llonya. She's my only toon in a precreated set, and that is her original DK greens (never getting rid of stuff finally came in handy)

And here's MogIt in action, showing me what that offhand (in Black Temple) looks like on my toon. 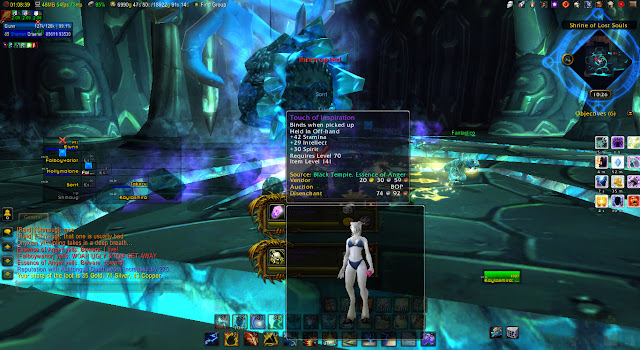 And I have no idea why all my space goats look so grumpy! Didn't there used to be a way to customize the pose of your toons in the Armory? Did they get rid of that or am I just too tired to see it?

I hope this makes transmogging a bit less ACK! and a bit more fun for you. Sure, there's tons of great sets (I saw a lvl 60 dressed as a SW guard tonight), but I think half the fun's making your own, plus there's loads of resources on sets.
Posted by Melfina at 6:31 AM