Now this, this is awesome!

As a long-time gamer, I'm used to the default male protagonist. I really don't like it, but I've learned to cope, just like I've learned to cope with over-sexualization of females and sexism in general.  In fact, the default male protagonist is one of the reasons I love games like Baldur's Gate (and can't wait for the new version) because I can be female or male. I love RPGs that don't make me explore a male character. I may choose to explore one (I've played male in tabletop before and had fun, and also have one planned out for the next campaign I'm in), but I LOVE the choice. In my book, feminism is about the freedom to choose, for both men and women.  Gender stereotyping hurts everyone.

So, this, this is all sorts of awesome in my book. A dad figured out how to gender-change Link so that "as you might imagine I’m not having my daughter growing up thinking girls don’t get to be the hero and rescue their little brothers." That's something I wish I'd had growing up, and I think it's a wonderful thing to do. Here's his blog post on how to do it, and please, pass it on. Flip All the Pronouns.

I know this isn't a WoW thing, but it is a gaming thing, and it's something I hope to see more of in the future. But, since this is a wow blog, here, have a screenshot featuring my newest favorite Wow character, Ken-Ken. Anyone who's for butt-punching sadness is pretty damn cool. I wish I'd been able to screenshot his entire dialogue. If anyone has a transcript, let me know, and if not, when Eiunn gets there I'll damn well make one. 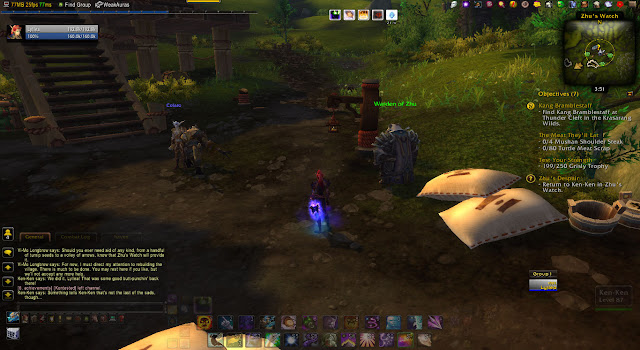