This is another in my very occasional series of posts of semi-useful things. Today, I thought discussing ideas for using such addons as Power Auras Classic or Weak Auras might be useful. If you're curious about what I've been up to in WoW (and in general), that'll be after the useful bit.

So, aura addons. They can do so many things that it can be very overwhelming. Here's a few ideas...

1) Resource alerts. One of my most used auras was Lyl's "hey, half mana!" one. It gave me a heads up and let me start thinking about cooldowns without being obtrusive. You could easily do this for health, mana, energy, or whatever.

2) Cooldowns. Especially good for short cooldowns in combat (and yes, you can make auras that are only active in combat, or raid, or when flagged for pvp...)

3) Debuffs/Buffs. Trinkets, time warp, diseases, other power increases/decreases. I had one for when my wolf howled (and gave my hunter an attack power boost)

4) Combos. How about having a "ACK!" alert when your health drops below a certain point and your self-healing button is available to hit? Your healers will appreciate it.

And if that's not enough, many excellent aura packages can be found on the web. Even if you don't use all of them, they can give you some ideas. I generally start out with a premade package, then tinker with it and make it my own.

1) Race-changed my shaman from goblin to panda. I never liked her as a goblin, and look, her hair streaks match her eyes! I'm hoping she'll be more appealing to me to play now, since I like shaman, I just don't like being short. 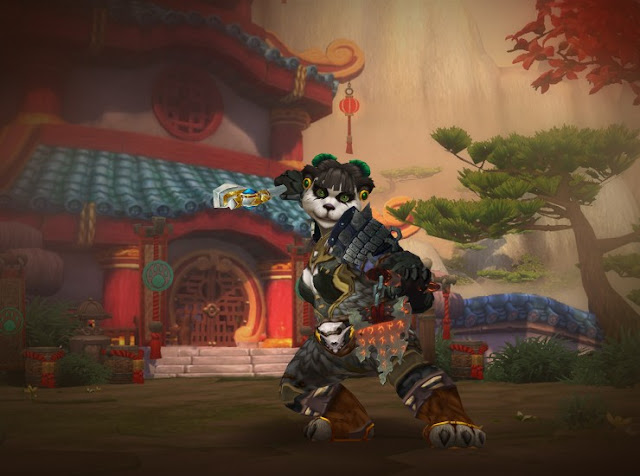 2) Rolled a belf monk and a panda mage, and tried some pet battles. I love the monk, but low-level mage is PAINFUL. Frostfire bolt has an almost 3 sec casting time, it's really slow and boring. Needless to say, the mage will be going away. 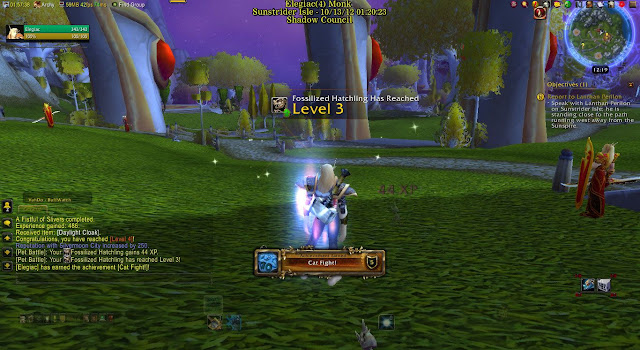 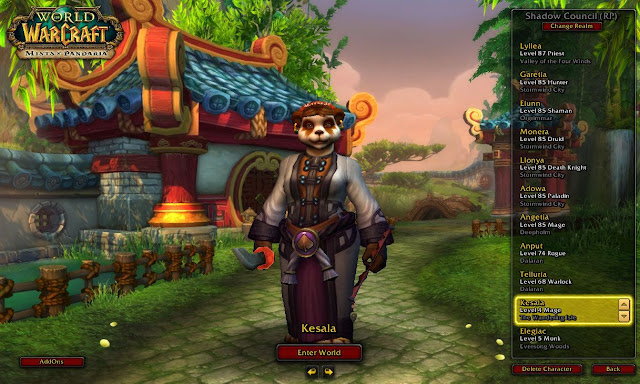 3) Leveled Lyl. She's almost done with Jade Forest (a couple of orchard quests and the drag food monastery quest to go for the loremaster achieve in the zone). I did get bored with the zone after a while, but I do have to admit that some of the story lines were great. After one, I wanted to renounce both Horde and Alliance and go be an honorary panda instead. 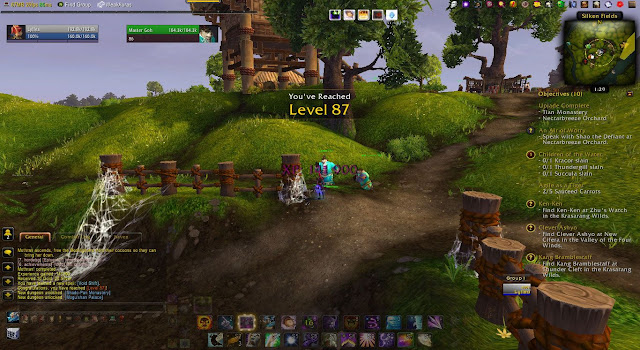 4) Got a ridiculously stupid hat. Good stats though. 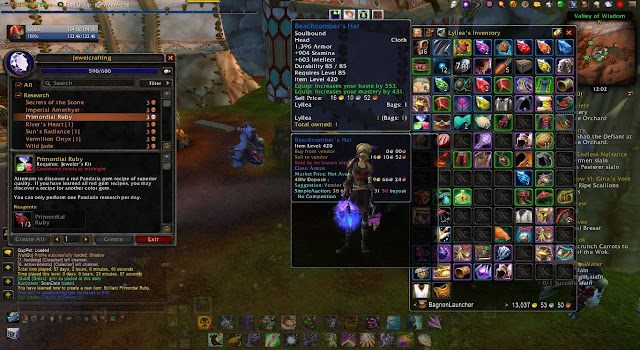 5) Took a huge amount of screencaps. Gotta hand it to Blizz, the Jade Forest is gorgeous. I'll be uploading my screencaps (unfiltered) via picasa, and I'll post a link (bear in mind that unfiltered means every screencap including the automated ones) 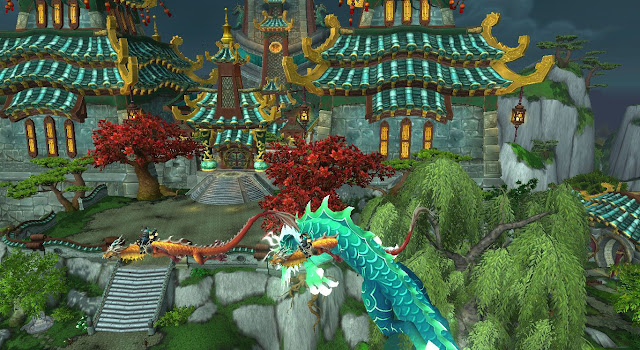 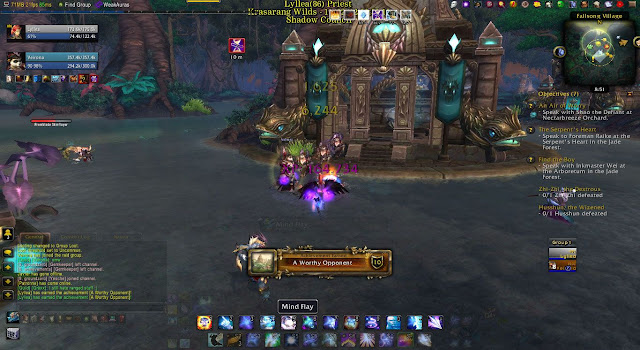 7) Started working on both the Tillers and getting cooking maxed. 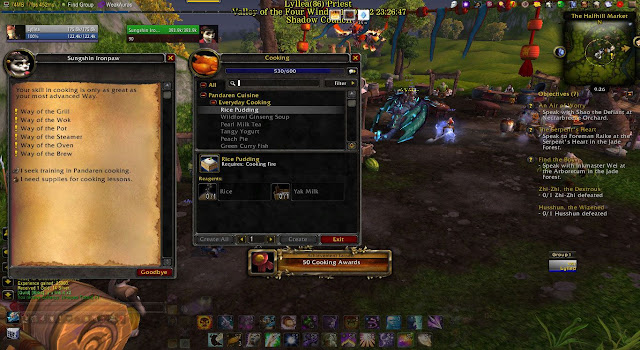 8) Ran brewery. Had no idea what was going on. 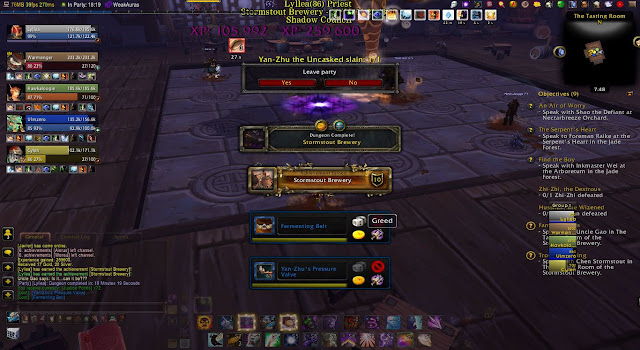 9) Maxed mining. JCing is pretty close, but leveling only via research is rather slow. 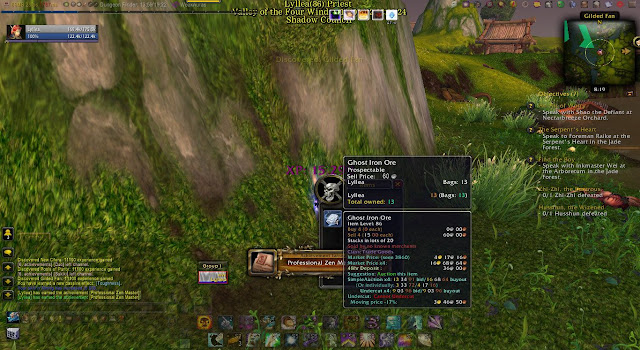 And generally ran around, fished a lot, and had relaxed fun. I've gotten bitten by the bug again, so I'm hoping to get Lyl max level and ready to raid by the end of the month.