A UI is a matter of preference to some degree, but some guilds do require that you a) have a raid UI and that b) it has what they think you need. So I asked around and got a list of what addons raid leaders want you to have as a hunter... Obviously different guilds may require different things, so ask before you app.

1. Omen or another threat meter. I have been known to pull off the tank (it's how I got Master of Arms), and especially with the bursty goodness of MM, you want to keep an eye on your threat. Park it over to the side somewhere, and set it to only be visible in raid and you're good to go.

3. Recount. Not as big a deal, but it's nice to know how you're doing. I would set this to only be visible out of combat, so you aren't focusing on it during.

I also use xperl because well, it's pretty, and it's very nice for healers (from what I've been told), but it's generally not a requirement for dps. 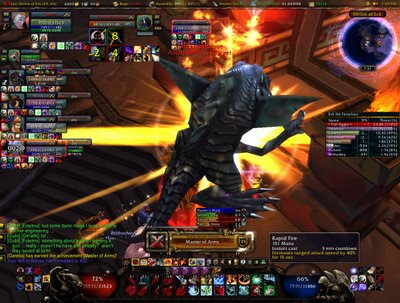 If I wasn't in combat, recount would be above the square of buttons on the right. Other addons shown are...
diablo 3 orbs, bartender, sexymap, xperl, quartz, and titanbar. Multishot took the screencap for me (it automatically screencaps achievements and levels).
Posted by Melfina at 9:14 PM