Yay I get to BUBBLE AGAIN!

Things are going well, all in all. RL's been very stressful and busy, so blogging was not a priority. Yup, I am a bit fail.

Murderotica's downed Magmar, and we're working on him again this week. We've made it to lvl 13 as a guild, yay perks (mmm, heirloom cloaks of awesome and rep gains). Baradin Hold guy is on farm, and best of all, I get to be disc again!!

I've never really been comfortable as holy, and well, last night my raid leader asked if I wouldn't mind switching back. Of course she asked in the middle of the raid, so I did my best to set a time record for respecing, reglyphing, redoing my bars, and redoing my vuhdo.  We got much further once I went back to disc, and my comfort level was higher.

I do think this experiment with holy was good for me. I'm now much more familiar with my group-healing tools, and I've gotten a new understanding of why I hate Chakra. The number of times I've yelled FUCK! as Chakra falls off just as I'm casting Holy Word:Sanctuary, well, it's in the hundreds. I will miss my Lightwell, and the lovely massive group heals, but I have my bubbles back!

Plus, I can go into TB or bgs as disc without feeling useless, and I get to smite. Yup, I went for an Atonement/Smite build, though I don't really have a good sense of how I feel about it yet. Hopefully I can talk some guildies into a heroic or two so I can practice and get a feel for how much healing Atonement does.

In other news, feral kitties are way OP. My lvl 84.6 kitty should not be within a couple k of Lyllea in dps. It just shouldn't happen. Feral dps has grown on me, and I plan to keep the kitty spec, and maybe do resto as well. The tank need's diminished, so I figure I'll do something I know I like, and if we need another bear down the line, heck, bears and kitties have a lot of gear overlap.

I'm still trying to figure out which alt gets leveled after the druid. Garetia's a blast to level, but her alchemy's maxed and there's nothing for her to learn in Twilight Highlands. The pally is not as fun, but I know there's blacksmithing and engineering patterns to unlock there. And then there's the dark horse DK, since there's enchanting patterns in Twilight too.

And some fun stuff. First, Monera got a title (she's the kitty in the center).. 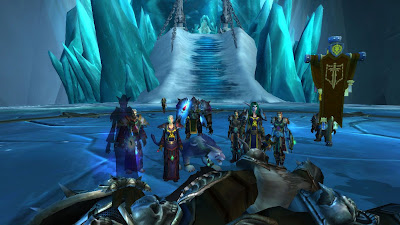 And Lyllea finally got that rare spawn killed and thus a new pet... 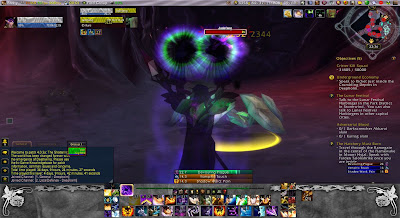 If you're wondering, that's Jadefang, the only green shale spider, and she drops the Tiny Shale Spider pet, who looks just like her, but tiny.
Posted by Melfina at 1:44 PM