The weekly runs of Ulduar continue. We've managed to get through crazy cat lady and beat our heads against the Council of Iron and Freya trash. Tomorrow, we attempt more Ulduar and 10 man TOC. I really dislike 5 man TOC, so this could be really interesting in a bad way.

I've installed Ensidia Fails (after managing to waste two battle rezes last week on Razor), and learned that it is automatically set to post in raid. Not good. I just want it to tell me when I fail (which isn't too often). Did manage to do that, eventually. It's helpful, especially on bosses I haven't seen before. I don't think I'd want to use it as a raid leader, since it's really easy to fail on some things (stupid Kologarn eyebeams for one), but for personal feedback it's great.

I'm also now running Old World Fun Runs every Sunday, and this week it's Blackwing. The plan is to get attunement for Molten Core at the same time, so that next week I can try some extreme soloing. I played with the BM build a bit while getting the Dragonblight Loremaster achievement, and it's pretty solid. I took it from there and am looking forward to trying a few things. Like Heroic MT, because I want the pet and mount. I'm at 68 pets out of 75, and I'm slowly slogging through the Skyguard rep grind for another pet. Then I'll start grinding Kurenai rep for the mounts, and if I ever manage to get enough gold for epic flying, hello Netherwing faction.

Now I just need to sit down, get the priest and druid to 60, and then figure out what I want to do about professions. The druid will need to have her herbalism boosted a bit (since it is very difficult keeping up with her leveling speed) and I need to decide what I want the priest to be. Right now she's a tailor/miner, and I could either a) not change that, or b) make her a jewelcrafter since having a high level jewelcrafter would be really nice.

And last but not least, a group shot. We had a birthday party for the raid leader in the Beer Garden... 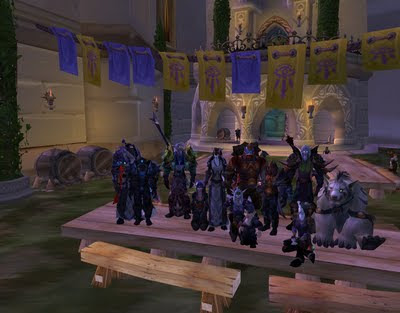