And the leveling continues...

My RAF pair have now hit 48, and I took a bit of a time-out to go play in Arathi Basin with the priest. It was interesting, and rather entertaining in a "Oh god, WTF, what the heck is going on!" sort of way. I did learn that shield is my friend, and um, I got some shiny achievements. The XP wasn't really worth it, sadly, but it was a good experience.

In other news, my hunter wanders back into Ulduar later this week, and I'm hoping that we do as well as we did last time. We one shotted the first three bosses and got Undying on two of them. For a new group, we did so well!

I also went to DragonCon, and won shinies. I have yet to redeem them (mostly because I have yet to unpack), but yay shinies to play with. I also got to be a quest giver for a bit, and even got a screenshot! 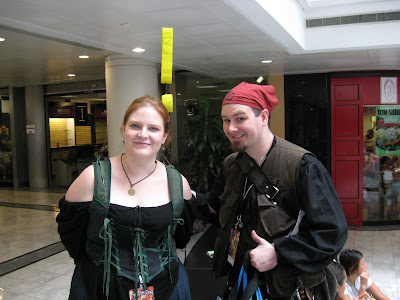