UI Addons (or what does base WoW look like again)?

I figured it's been a while since I've done an addon post, and what I'm using has changed substantially since the last time I talked about UIs.
First, a screenshot of Garetia's UI. It won't win any pretty awards, but it's functional (if a bit overcrowded). All addons are available on Curse, unless otherwise specified. 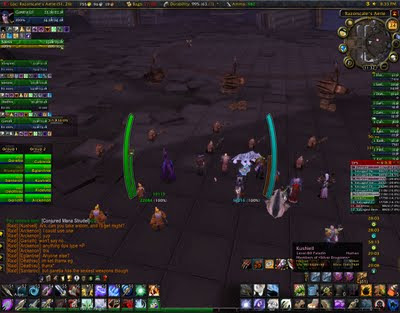 So, starting at upper left and going counter-clockwise, we have...
Shadowed Unit Frames. I switched from XPerl to save some memory.
Below that we have Vuhdo, which I installed for the leveling priest and druid for healing purposes. But since I try to keep my ui fairly consistent, it's showing here. I did fiddle with it a bit so that it only shows the group I'm not in, and it's nice for knowing if it's a wipe or not.

At the bottom, we have bartender 4, and button facade:Caith to make it look all pretty.
Then at the bottom right, those gears are SatrinaBuffFrames (installed again for priest and druid) and ButtonFacade: Gears so that they look like that. I don't really use this on the hunter (except for knowing how much time is left on my ram racing buff), but I do like the look. I also like the fact that it puts debuffs in their own column and colors them red.

Then we have recount (cause I like to know how I'm doing on dps) and if I were in combat, you'd see Omen in the same spot.

At the top is Titan Bar. It's the first addon I ever got and I still love it.

Last but not least, the bars around Garetia are MetaHud.

And if Blizzard didn't reset my "enable out-of-date addons" with every patch, you'd also see...
SexyMap because it's pretty
Power Auras Classic because it's insanely powerful and I have no idea how I lived without it. Expect a post on it next because honestly, it's an addon I think everyone should have.
Autotrack and Viper Notify (great hunter addons)
Quest Helper
Deadly Boss Mods

And these are my new weapons. Bask in their awesomeness... 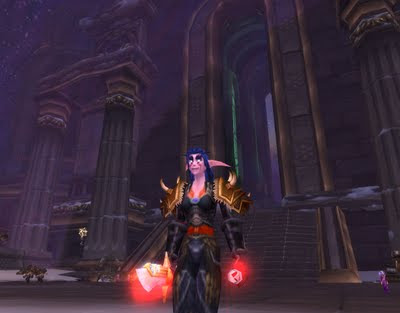