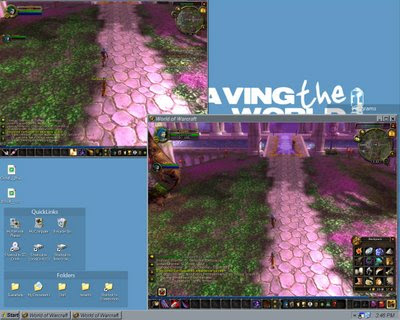 Ooh, lookie what I can do! Yup, that is two instances of wow running, and two characters being controlled at the same time. Or rather one character being controlled and one on follow. It's a warrior and priest pair, and so far it's going pretty well. The warrior's a skinner/herbalist, and the main one I'm controlling. The priest just follows along, and occasionally I switch over to her to heal the warrior. She has no professions as of yet, but I'm thinking Inscription/Tailoring. I'm not using any fancy software or macros or anything atm, but I need to find some. I know there's an addon for multiboxing that I need to go looking for, and I have the key cloning software, just haven't figured out how to use it yet. So for the moment, it's the primitive, but effective, window switch.

Quite a change from yesterday when I couldn't log on at all. Of course, I ran the repair tool which removed all my addons, but I've decided to use that opportunity to pare down my addon collection. I think instead of the crapton I have now, I'll stick with the following.
XPerl for unit frames and general pretty
Bartender because if it isn't on a bar I'm going to forget I have the ability
Questhelper cause I like being told where to go
Sexy Map for the pretty
Power Auras Classic to tell me important stuff like Demon armor has fallen off the warlock. I suspect it'll be even more useful with the dualboxing to remind me to keep both characters buffed.
Auctioneer because cash is good
Recount because I need to know my dps. NEED.
Omen, because otherwise how will I know if I'm winning the minigame or not? And yes, I routinely do win despite not being top dps. Stupid bursty mm spec, why can't I quit you?
Deadly Boss Mods because otherwise I will stand in the fire. (okay, so I generally don't, but still good to have)
Altaholic because I am firmly convinced this is the greatest addon EVER. I love being able to see what my alts have and don't have, where their profession skills are and what they can learn, as well as being able to select a recipe and know instantly what alts don't know it yet. Great addon for anyone with alts.

I'll let you guys know more about this multiboxing thing as I figure out more, and
HAPPY 4th of July!
Posted by Melfina at 4:45 PM