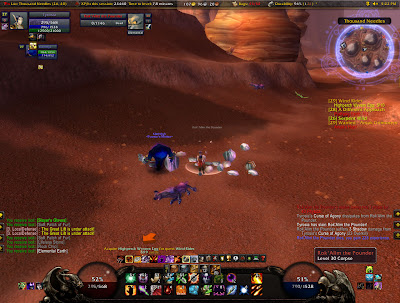 Yup, I know. No posts. Honestly, there hasn't been much to say. I could go "ooh, what's coming in 3.2" but everyone else on the planet's doing that, and I have no desire to hit the PTR. In fact, I haven't been playing much at all.

My guild's running 25 man Naxx this week and hopefully will keep doing so. We did really well last night (3 wings, two wipes, and one amazing takedown of Thad). 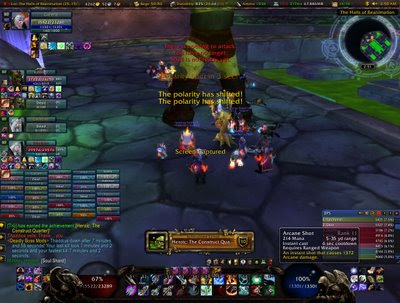 One second left. It was epic, I tell you.

The warlock (up there in the first screenie) is now level 28, and I am proud to say that a) she has more than enough gold to pay for her mount (100+ gold) and b) I have managed to get her to level 28 without questing in the Barrens. I'd always heard that you have to do the Barrens and they're huge and they suck, so I figured I'd try to avoid them. Ghostlands+ Hillsbrad+ Thousand Needles seems to be doing the trick rather well. I think I'll try Silverpine for the next Hordie, whenever I get one to an appropriate level. But since I have quite a few more toons to get to 30 before I can call the Alt Project done, it'll be a while.
Posted by Melfina at 6:08 PM