And the search continues....
Sadly the wasp was vetoed by the melee, who complained about not being able to target. I've picked up a raptor, but so far am unimpressed. The color change is nice, but um, I only like one of the two schemes. Le sigh.

In other news, the replenishment nerf is making my life more interesting, but isn't too bad. Instead of being at 90% or above all the time, I might actually run out now. But it is nowhere near as bad as it was right after 3.1, when I could spend 40% of my mana in 3 shots.

Naxx is bugged, which derailed our raid this week. When both the live side and the dead side decide to eat your face at the same time no matter what side you're on, and also don't have the courtesy to bugger off once you engage the big guy, well, it's a near-perfect recipe for a wipe. Stupid mobs, breaking the laws of physics.
Just as well, really. Two quarters down and not a single agility drop. Obviously this wasn't my gear week.

In other news, I give you a screenshot of the wasp. I am now officially attached, and am keeping him to run heroics and anything else that doesn't involve the complaining melee. Yes, he is that big, and see if you can find the smiley face! 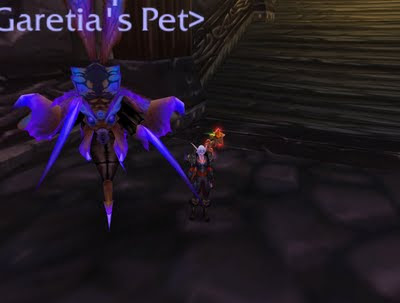