How to Disc, a Simple Guide. Part 3, leveling disc and the disc ui.

First off, leveling disc.
It's not bad.  Really.  I leveled as disc from 60 to 75ish, and still am far more likely to do dailies and pvp as disc.  Your damage is nowhere near as good as shadow, but your survivability is, well, kinda ridiculous for a clothie.  If you don't want to dualspec, and still want to be viable in both questing and dungeon healing, disc is the way to go.
I followed this guide which I found on the forums.  It's a nice leveling build with decent damage potential and you can still heal in dungeons without any trouble.  Now, if you're wanting to just level in dungeons as a healer, you're better off going for the standard disc build, and glyphing flash heal and power word: shield.  Either build will give you some pvp survivability, and combined with heirlooms you should have no problems at all.

Now, the disc ui.
There isn't much in here that's specific to disc, it's more of a general healer ui thing.

First you want a good set of raid/healing unit frames.  I really would not recommend the default ui for this.  Get Vuhdo or Grid or pitbull or shadowed unit frames or Xperl or something.  I heart Vuhdo and it's what I would recommend for healers, but try different ones out, see what you like. Some have click-casting, like Vuhdo, and some don't, and honestly I'd hit the plus heal forums ui section and look at what different healers use.

Second, you need to be able to see certain buffs and debuffs very clearly.  Your unitframes should be able to do this for you with some configuring, but it's also helpful to know things like "Borrowed Time is active" or "You're been silenced/locked out".  For that, I recommend the awesome that is Power Auras Classic.  You might also want a good set of buff frames, but that's more optional.  Just make sure that Weakened Soul and PW:S are really obvious.  Trust me.

Third, a good set of bars.  I use LunarSphere on my priest, because it doesn't switch bars when I switch specs, only when I switch forms (aka go into Shadowform).  This is nice cause it means I have all my healing spells easily available in shadow for when extra healing is needed, but I hate it for most of my other toons and use Bartender exclusively instead.  You can also set bars to fade out in combat or unless you mouseover them, which is a good way to have spells you need once in a while available but not in your face.  Dominoes is also a nice option for bars, but I've never used it.

Fourth, your standard ui stuff, aka Omen, Recount (with Recount Guessed Absorbs), and DeadlyBossMobs. You know, the addons pretty much every guild expects you to have to raid with.

Things to consider with a disc ui...
You're going to need to keep track of a lot of information, so minimize unnecessary info.  For example, do you really need to see your minimap in raids?  Why not set it to fade out unless you mouseover it?  Why not put your chat windows somewhere where they won't distract you?  Do you need to see combat text? Do you need to see how long your buffs have left or just when you need to reapply?  Think about things like this.

Building the UI
Sit down with some paper.  Make a list of what you feel you need, then draw out where you want things to be.   The below is an example.  That's actually a combination of my pally and my priest's uis, but it gives you an idea.  And that took me no time at all in paint. 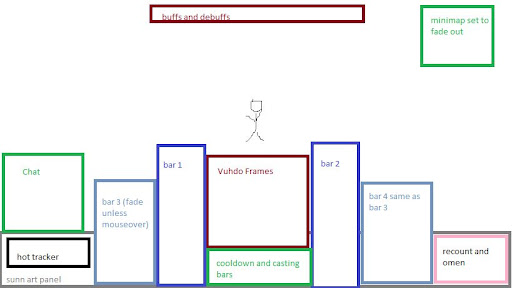 As you can see, I have my raid frames, my two main bars and my casting bar all right together and all right under my toon.  Things I occasionally need to glance at (chat, omen, hot tracker) are off to the sides, and stuff I only need to check once in a while (buffs) are at the top.  I use a Sunn Viewport Art panel at the bottom to arrange all this stuff on (you can see it in the left corner though it does extend all the way across the screen), and I use Align liberally to make everything line up.

And now that you have a layout for your ui, it's much easier to make it both look nice and be functional.  So that's how to build a disc ui (or really any ui), and we have now reached the end of the How to Disc series!  I hope you found this informative and useful, and if you have any questions please don't hesitate to email me or bug me in game or on twitter.
Posted by Melfina at 1:03 PM

Labels: how to disc, ui