This led me into how I classify blogs, and after much pondering I came up with the following Venn diagram... 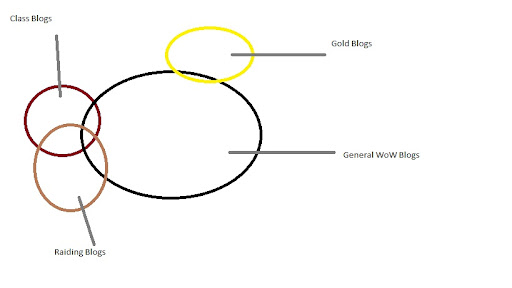 Now, this is a bit oversimplified just because I couldn't figure out how to draw anything more complex.

Does this make sense?  Well, maybe some examples will help...
Big Bear Butt is a class/general blog.  He talks frequently about druids but he also has good general info posts.  So I'd stick him in the overlap between the black and red circles.
Pig Pigtail Inn is a general blog. She doesn't talk much about classes or raiding or economics, and I'd be hard-pressed to simplify her blog content into a sentence without leaving quite a bit out. She's in the black circle.
Aspect of the Hare is another class/general blog. In fact there are very few class-only blogs.  Most class blogs also talk about raiding or personal accomplishments or rp or other stuff.  She's wandering around with Big Bear Butt.
Just my Two Copper is a gold blog. Great place to find tips and tricks on making gold, not so good if you're looking for anything else.  This one's right in the middle of the yellow circle.
World of Matticus is a raiding/class/general blog. Mostly raiding, but there's good stuff on guilds and classes in there as well. Matticus is hanging out in the overlap between the black, red, and pink circles.
Psynister's Notebook is a class/general blog. It's just an unusual one that doesn't focus on a particular class.  But he's one of my go-to places for info on leveling any class, hence my thinking of his blog as a class one.  A class blog does not have to be specific to one class, but if most of what you post is class-based I'm going to think of your blog as a class one.

Now this is as much an opinion system as anything else.  If I tend to associate a blog with a particular class or classes, I think of it as being at least partly a class blog.  The same goes for raiding and gold-making.

So what good is this?  Well, it allows you to not only classify your own blog but see how new readers might.  I'm going to use Aspect of the Hare as an example.  Go read the entries on the first page, or just skim the titles.  Does it look like a hunter blog?  I see one post on trees, several on wandering around the world, but no hunter-specific posts. Now, that's not bad, but you can see how a new reader might wander across that blog and not really associate it with hunters except for the huntery guides in the sidebar.
If you want to classify yourself as a class blog or a raiding blog or a gold blog, you need to check every so often and make sure that you are talking about a class or a raid or gold.  If you don't care how your readers might classify you, write about whatever you like.  You may lose some readers who are looking for specific topic blogs, but if you're an entertaining read I'll still keep up with you.

For the record, this is a general blog with the occasional (very occasional) class post.

And last but not least, Pike is back so go read Aspect of the Hare!  Yay Pike is back!
Posted by Melfina at 2:01 PM