It came from the dungeon finder and a holiday with an XP bonus (complete with wall of text crit...

So between Ahune and frantically leveling alts, I've been doing a great deal of dungeon running.  I figured I'd share some of the bad (and good) with you. Mostly because I need to share the fail and win with someone. 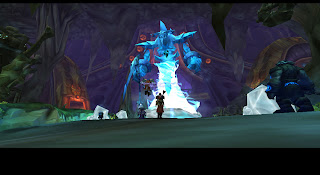 First, a ret pally.  A special ret pally.  A ret pally who, at 80, was not only out dpsed by my disc priest (who was also healing), but was also outdpsed by my dk.  Who's 66. Shouldn't auto-attack do more damage than that? Yeah, I got nothing.  And no, the fail pally is not in the picture. I just thought Ahune's kinda nifty-looking.

Second, the pug killers.  Eiunn is smack in the middle of this series.  Maraudon, Sunken Temple, Blackrock.  If you wipe in these your pug almost always falls apart because no one can figure out how to get back in. While I have now mastered the art of finding the entrance to Sunken Temple, and I have a vague idea of what to do once in there, don't ask me where anything is,  It all looks the same and I don't have a proper map.  Good thing the Satchel doesn't give me anything good anyway, so I don't care if I get it or not.  I just want the XP.  Ooh, and a trinket that doesn't talk to me when I use it.  That'd be nice too.

Third, the inexperienced tanks. Now, this situation has improved immeasurably from when Lyllea was leveling.  I can think of maybe one or two obviously inexperienced tanks I've gotten on a leveling alt recently. But it does still happen, and I must share a couple of my favorites...
the ret pally tanking with a two-hander.  This wouldn't have been so bad, if he hadn't been stacking spirit.
the bear of yelling. Not a bad bear, but well, my mage pulled off him like wow.  In an effort to control my aggro I went to frostbolt spam instead of blizzard and then got yelled at for lousy dps. Okay, not omg awful, but rather annoying.

Which brings me to fourth, the recount lover. Adowa's been pugging Ahune for the pet and the scythe and the frost, and she's been doing it as ret. Last run, she zones in, we start killing, and I notice the conspiciuous lack of heals.  I start healing the tank, and me, and about the time the frozen core shows up the healer starts healing. I switch to hitting stuff with no mana, and get yelled at when Ahune comes back.  Apparently my dps sucked. Can't think why, maybe cause I used all my mana healing?

And last but not least, the huntard. Not only did I see one pulling for the tank, jumping around like an idiot, and keeping growl on, he also decided to play tank. Our tank went afk and he started pulling.  I wouldn't have a problem with that if he was using a tank pet, but a raptor? Amazingly we didn't wipe, but unsurprisingly the pet did not hold aggro against my mage. Thank goodness for frostbolt's slow effect.

Now, the win.
My mage spent most of the afternoon running dungeons in a rotating group of win. Way too much Scarlet Monastery, but loads of xp and a couple of levels. Plus, no one bitched at me for drinking or accidentally pulling, and, and I had someone apologize for breaking my sheep! Inconceivable!

Eiunn managed a successful run of Sunken Temple thanks to one knowledgable healer.  We all followed this priest of knowledgeableness like sheep, and it was a great run. So, Healana of some server in my battlegroup, I salute you.  You were awesome.

And the final tally after a week of holiday xp bonus...
Druid hit 72 and squished Nexus. Now over to Howling Fjord cause I've mostly finished Borean. Am avoiding Utgarde Keep like the plague since I don't want to heal it and have no idea how to dungeon dps as feral.

Mage hit 32. Had fun. Discovered I apparently glyphed polymorph and the penguin is ridiculously cute.  Also, Blizzard is ridiculous damage. I like topping meters with no effort ;)

DK hit 67. Is now running around Nagrand. Nesingwary quests plus xp kill bonus is win. Since I don't have to shuffle heirlooms to play her, she should get some more leveling time now, probably when I get dungeon burnout again.  Sadly I'm still looking for a couple of decent one-handers (decent meaning they have + strength) for her so I can try dual-wielding frost.  Ooh, and her enchanting is now 450. I made the final push so I could put spellpower on my new staff and well, the AH was charging an arm and a leg.

Shaman hit 50. Needs to run more dungeons (go back to Sunken for her class quest, wrap up some Maraurdon and ZF quests, and then get quests for blackrock). Kinda hoping I can get her to 60 this week, but I've gotten a bit burned out on her and will settle for 55. I'd also like to get her exalted with Stormwind, but leveling first, rep grinds second.

Hunter got ice pet, priest got Scythe of awesomeness, and pally got loads of cloaks.  Priest has also gotten Adamantine from the Ahune runs (there's a node in the room).  Pally explored northern Kalimdor (before I got distracted by leveling).

I feel like I've done really well this week in getting stuff done. I'm hoping to continue the trend through next week, but with Fi's wedding and some other personal stuff I know it probably won't happen.  That's okay, it's not like I have a deadline for any of this.

Next entry will be vaguely useful or possibly entertaining stuff, I promise.  Like um, totems for the leveling resto shaman or more World Cup of Azeroth.  Probably the later, as the former would involve actual research.