I apologize for the lack of entries this week. The truth is...

I haven't been playing Wow. I probably managed about an hour this week. There are several reasons for that, guild drama, the fatigue of hitting 60, but mostly, fear. Yup, fear.

Perhaps some background would make things a bit clearer. I have a family history of addiction. It would be very easy for me to loose myself in WoW. Too easy. Things are hard right now, and one of my coping mechanisms has always been escape. And I'm afraid of giving into that, so I took a break, decided to focus on real world accomplishments. I now have a scarf done, and another started, I've discovered a local D&D group, and I've made the first steps towards surgery. Plus, I got two stories that are due at the end of January started, and a third original fic started as well.

I do have an entry ready to go once I type it, and I do have some things to say about leveling my priest. First off, apparently I chose the "blood elf male most luikely to enjoy taking it up the butt from a Tauren option". In my defense, I wanted to look at a cute butt while leveling, since I knew this character would take a while. Also, I have discovered this character's desperate need for a wand. The damage he does without one, well, sucks monkey balls. 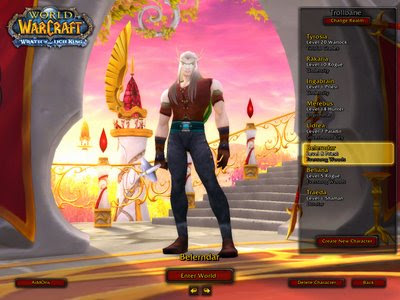 Not much else to say, really. My DK is out of the starting area, and mining her heart out around Ironforge. I need the cash, so she'll be doing this for a while. My hunter will not be moving to Outlands until she is exalted with a faction that isn't Darnassus and gets the gold for a fast mount. Since the only other two factions I'm revered with are Gnomer and the dwarves, and I can't buy a mount from them till the patch, it may be a while.
Posted by Melfina at 7:37 PM