Garetia has now hit 72, and I've gotten to do some dungeon running. I've also finished the Borean Tundra, and am about halfway through Howling Fjord. Most of my equipment has now been upgraded and I've gotten a few new abilities.
This is my DPS from part of Nexus (and the only one higher than me is a lvl 80 hunter) 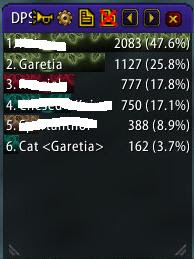 You may have noticed the Cat. I decided to do a bit of pet experimenting. Boo, much as I love him, is not holding aggro. Not that I'd really expect him to when I can take down a mob in 4-6 shots (assuming mob is non-elite and at my level). Misdirect is costly, and I go through mana ridiculously fast as is. So I thought I'd try a couple other tank pets. While I was wandering around, I remembered that a) I had sacred frostsaber meat in the bank and that I'd wanted to tame Shy-Rotan. I picked her up and I've been running around with her ever since.

I've been pleasantly surprised by her. She can hold aggro once I misdirect onto her (unlike Boo) and she does more damage so the mob falls down faster. Boo did more front-end threat, but once he lost a mob it was gone. My new cat has actually pulled them back off me.

I will likely pull Boo back out of the stable once 3.1 hits (since all tenacity pets will be getting Thunderstomp), and I will be keeping my eyes out for SW's albino crocolisk, but for the moment Cat is the pet. Now I just need to name her....


Oh, and I did a little experimenting with the mechanicals in BT. Boo had much more trouble than usual holding aggro on them, and after fighting a couple and looking at the combat logs, they may be immune to growl. More testing is needed, since I haven't tried manually casting it yet.
Posted by Melfina at 5:29 PM