So... Warriors. Mine is now level 10, and the only thing I like about her is Charge. Charge is a blast, but otherwise, I am not impressed. She takes about as long to kill stuff as my pally (note, it is entirely possible I am doing it wrong) but lacks the healing. I want oh shit buttons, darn it, and Gift of the Naaru is not enough. I've resorted to sending her potions from the priest (and now alchemist) just to make her not so annoying to play. I don't know if I haven't gotten far enough into the class or what but there just doesn't seem to be any spark or finesse or even a nifty gimmick to hold my interest. Just a ton of hit things, try not to die, lather, rinse, repeat. I chose Blacksmithing for her, but I'm beginning to think Herbalism (for the self heal) and Alchemy (for the pots) would have been better.

The priest is now level 10, and heading towards 11 at a fairly regular pace. Once I get into the rhythm of (new spell I just got and can't remember), Smite, Shadow Word Pain, wand till dead, with occasional applications of bubble and self heal (followed by another smite), she became fun to play. She also lasts longer than the warrior (because of the healing). I've decided on Disc spec, since a) that fits the character's personality, and b) I did want to do a healing spec for leveling and Disc is apparently less ick than Holy. Alchemy is kinda wasted on her but I like the armor potions.

It's funny how with some of these I can see how I'm going to spec by how I play. The druid will be a boomkin because well, that's the way I play her. The warlock is destruction because I like burning things down, and the mage is frost because while I like burning things down, it's hard to do without a blueberry to hold aggro. Frost lets me slow stuff down enough to slaughter it.

Profession-wise I have noticed some useful things. One, enchanting goes quite well with jewelcrafting. Make the ring, disenchant the ring, repeat. Two, if you have an engineer, it is nice to have both a skinner (for leather) and a jewelcrafter (for prospecting). Third, an engineer mage might be very nice. I haven't tried it, but the target dummies could provide a nice blueberry substitute. Four, inscription is nice while leveling (due to the recall scrolls), but man, herb intensive. Fifth, have a tailor. Bags are expensive (more so on my Horde server than the Alliance one). I want a soul bag, darn it (and at 80 gp they're completely out of reach for the level 21 warlock).

Ironforge is hands down the best place to level mining and herbalism. Way more herbs and ore than any other starting area I've seen. Loch Modan's great as well.

And last, but not least, 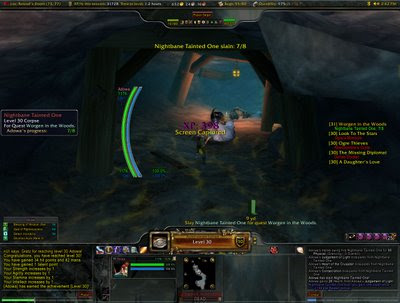